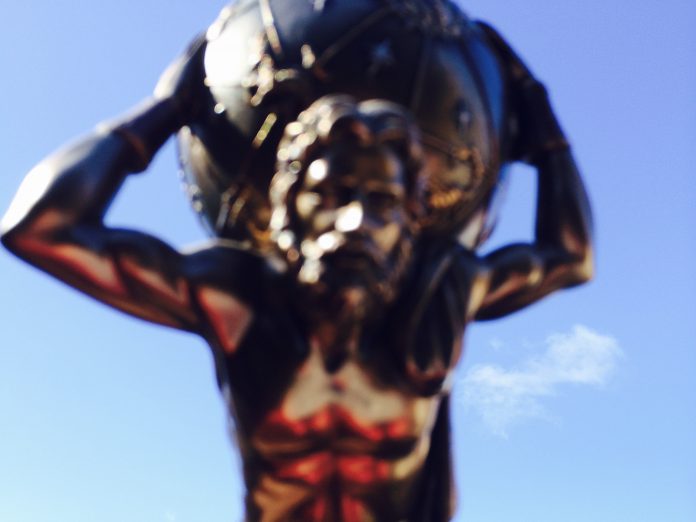 The Greek Gods and Goddesses proved a point and made a few people look like fools.

No gents, the earth isn’t flat.

To accomplish this, Atlas the Titan who held up the earth had to be frozen in time. The Atlas Mountains in northwestern Africa spanning Morocco, Algeria and Tunisia remind us of the Titan. The remarkable legend of Atlas went much further, as his name lived on to define a book of maps. This is why we can be sure to thank Atlas and Greek Mythology for the world.

I think everyone would agree with me that this round wondrous earth is filled with an astonishing array of life forms. As a result, space had to be filled with nothingness. Zillions of planets within that space had to contain no life forms because earth is the planet of opposites.

Recap of Atlas myth: The Olympian Gods battled against the Titans for supreme power. After the Olympians became victors, the Titans were punished. Zeus condemned the Titan Atlas to carry the weight of the earth for all eternity as divine punishment.

The only time Atlas had his burden removed happened when Hercules approached him for a favour. Somehow Hercules convinced Atlas to help him on his quest. To do this he had to take on the burden of the world while Atlas was gone. Once Atlas returned from his errand like he swore he would do, he didn’t want to take on the burden again. Hercules cunningly convinced him to take the burden just for one more short period of time until he could get a better grip of the earth in a more comfortable position. When Atlas took the weight again, Hercules let go and departed with a laugh.

A fireball perfect for the world, located just the right distance away from the earth, capable of sustaining itself throughout the ages for the benefit of the earth. Sounds perfect. The Greek Gods realised the importance of light and heat, but they weren’t willing to give it to us full time.

The moon is required to reflect the sun on parts of the world to avoid pitch blackness and to control the tides, among other things. The sun couldn’t do it all. The world wouldn’t work if the sun were in a fixed position and the earth didn’t spin, since only half the world would benefit at most. You might as well have a flat earth then. The Greek Gods couldn’t have that.

The sun is a fireball, so the moon had to be a rock filled with craters blasted by the balls of other rocks called meteors. The moon also had to be much smaller in size than the sun. They are opposites after all.

Recap of Icarus myth: The Icarus myth wouldn’t have been possible without the sun. As you probably know, his wings fell to pieces after he and his father escaped from the minotaur’s labyrinth, when he flew too close to the sun neglecting his father’s advice. As he rose closer to the sun, the added heat melted the wax holding his wings together. They fell apart and he fell into the sea where he died a tragic death. The sea became known as the Icarian sea, while a nearby island became Icaria (or Ikaria) in his memory. Luckily for most people on earth, the sun appears to be in a perfect position.

If there were eternal darkness in the world then how would anyone see the wonders of the world? Fire alone wouldn’t have been able to sustain the world. Sorry Prometheus. Even if we didn’t need the day, living without it would have been a major hassle. Walking around as you can imagine would be very difficult with 24 hours of darkness. Time would have no real meaning. Fires would be required for guidance. Trees would have quickly disappeared due to the demand for firewood.

Night time had to exist because if daylight existed continuously, people may have evolved to live without sleep. The Gods felt sleeping had an important role to play for nightmares. Without sleep, Morpheus, God of Dreams would have lost his job. So would Hypnos, the God of Sleep.

People were able to develop their own totally unique culture in certain parts of the world without any outside influence, until the time when crueler cultures were able to cross the seas. Then all hell would break loose. The Greek Gods were curious to see the outcome.

If there were no sea, there would be no fish, and fishing is fun. Water is harvested from the seas to grow plants and trees. Without the sea, nothing would grow. The sea had to exist. Poseidon had to have something to rule.

Most babies cry when they enter the world. It is a bloody messy affair and it often doesn’t get much better when departing the earth. I can only assume that if you make it into eternal paradise you’ll be ecstatic.

The Greek Gods and Goddesses will classify you by the end of your life. Be very careful. Eternal paradise is at stake. As rulers of the Universe this is their prerogative. There are no rule books for entry.

Anyone living on earth for long enough will experience at least one of these two emotions.

Do you hate the Greek Gods and Goddesses?

Who do you hate?

Some female spiders will eat the male after they mate. A Goddess can also take you to heaven. Females are important. Pandora gave ‘hope’ to the world.

Recap of the Pandora myth: Zeus commanded all the Gods to create the first woman. She would be called Pandora, meaning ‘all-gifted’ since all those who dwelt on Olympus gave her a gift, including believe it or not, deception and guile.

‘I will give men … an evil thing in which they may all be glad of heart while they embrace their own destruction.’ So said the father of men and Gods, and laughed aloud.

This is how it all started anyway. Zeus had to punish earthlings for the defiance of Prometheus, who stole fire from heaven for the benefit of mankind to ease their suffering. What better way than creating a woman? She appeared on earth clutching a jar, some say box, with instructions not to open it. She couldn’t help herself. After every nuisance and trouble had escaped from the jar, the only thing left was hope. There are numerous versions of this myth, some quite different, but at least this gives you the gist. Hope, is the only thing left.

You could say Prometheus received the most bizarre punishment of all time for showing kind heartedness to man. Zeus had him chained to a rock where an eagle came to eat his immortal liver every day. It grew back each night so the torture could continue on again the next day. Prometheus still had hope though. Years later, Hercules eventually rescued him by killing the eagle and unchaining him. Hope this makes sense for you.

The chicken must have come first. Think of a mother and baby. You would never say the baby came before the mother. Therefore it is the same with a chicken. The chicken must have been created before the egg. From then on the chicken was able to reproduce and lay eggs. After all if no one knew what the outcome would be, it may have turned out to be something unpleasant. As the Gods would have it, chickens were ordained to be one of the true food delicacies on earth and eggs were made to be useful for cooking cakes. Thanks to the chicken.

Greek Deities or one God

The Greek Gods and Goddesses obviously have their own agenda. Only supreme beings like them could have created the land of opposites. No one else could possess that kind the imagination.