Home Greek Gods and Mythology 10 Places in Italy to See Paintings of the Roman & Greek... 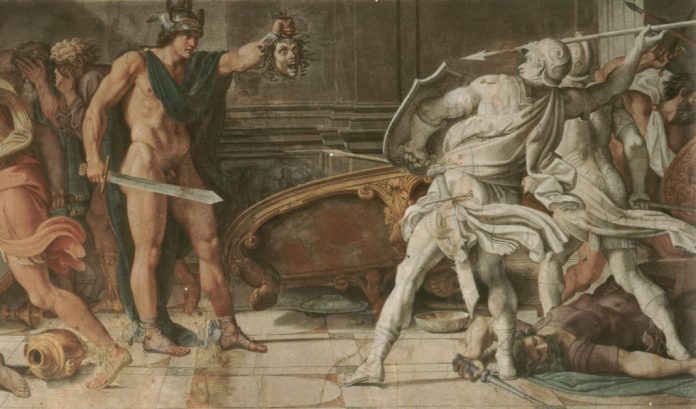 Italy has some outstanding places to visit when looking for paintings capturing the essence of the Roman & Greek Gods in Art.

It’s very surprising especially after the “Bonfire of the Banities” which saw numerous renaissance works of art, including books and manuscripts destroyed, because of Christian beliefs.

Girolamo Savonarola was an influential Dominican priest from 1494 to 1498 who saw naked women and themes of Greek mythology in art as an abomination. Due to his power and influence at that dark time he oversaw the burning of many great works. Luckily for art lovers everywhere, he couldn’t destroy it all.

The Gods of Olympus somehow managed to come back into vogue in Italy even after the Bonfire of the Vanities. The Greeks however sadly focussed all of their attention on another imaginary so called god. Their great ancestors left them a great legacy and they blew it on some other guy.

Here’s where to go in Italy if you’re looking to find paintings of the Greek and Roman Gods.

Palazzo Farnese or Farnese Palace, first designed in 1517 for the Farnese family, is one of the most important High Renaissance palaces in Rome.

The Palazzo was inherited from the Farnese by the Bourbon kings of Naples. It was purchased by the French government in 1874, however the government of Benito Mussolini ransomed it in 1936. The Palazzo Farness from 1936 onwards has since been home to French Embassy under a 99-year lease agreement for which they pay the Italian government a symbolic fee of 1 euro per month.

The Loves of the Gods (1597-1608) in the Farnese Gallery is the most well known masterpiece.

The Loves of the Gods

The Triumph of Bacchus and Ariadne can be viewed in the centre scene. 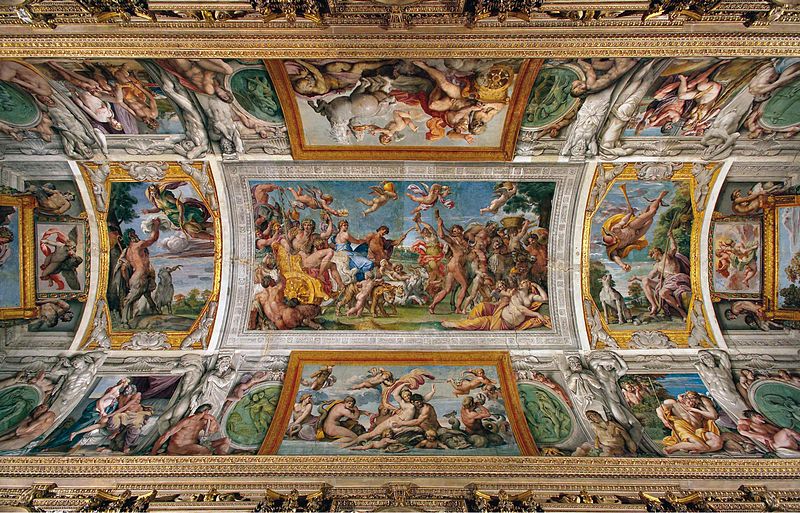 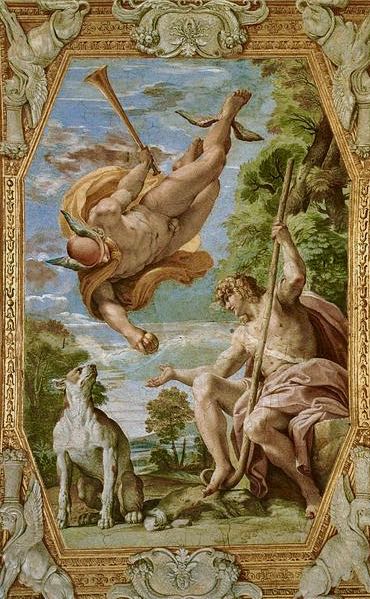 In the above fresco you can see Mercury (Hermes) giving the golden apple to Paris before the judgement.

Below is a wall painting in the Farnese Gallery showing Andromeda and Perseus. Perseus is seen in the top left hand corner riding Pegasus while carrying Medusa’s head.

Several main rooms in the Palazzo Farnese were frescoed with elaborate allegorical programs including the Hercules cycle within the Hercules Room. 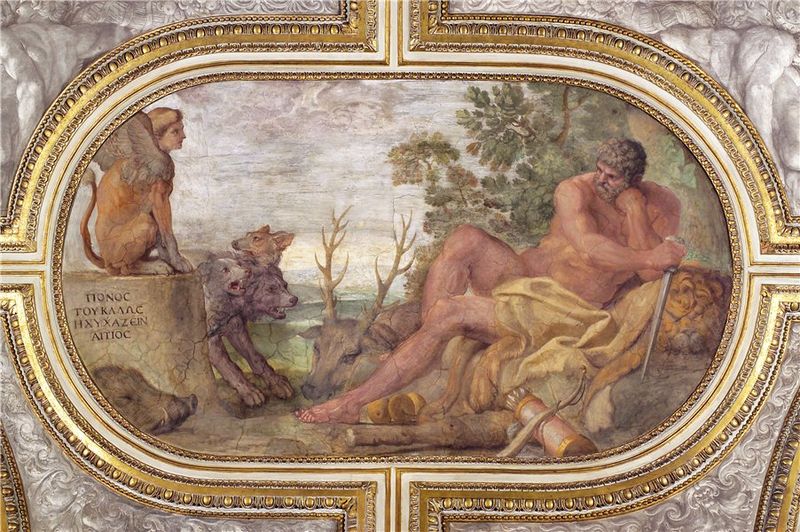 For generations, the room with Herculean frescoes was also the home to the famous Greco-Roman antique sculpture known as the Farnese Hercules.

In Puccini’s opera Tosca (1900), set in Napoleonic Rome, the heroine confronts the malevolent chief of police in Palazzo Farnese.

The Loggia of Cupid and Psyche

King Midas Judging the Musical Contest between Pan and Apollo

The left-side of the painting shows the result of the music competition. After King Midas picked Pan as the winner, Apollo took swift revenge by turning the ears of King Midas into donkey’s ears. 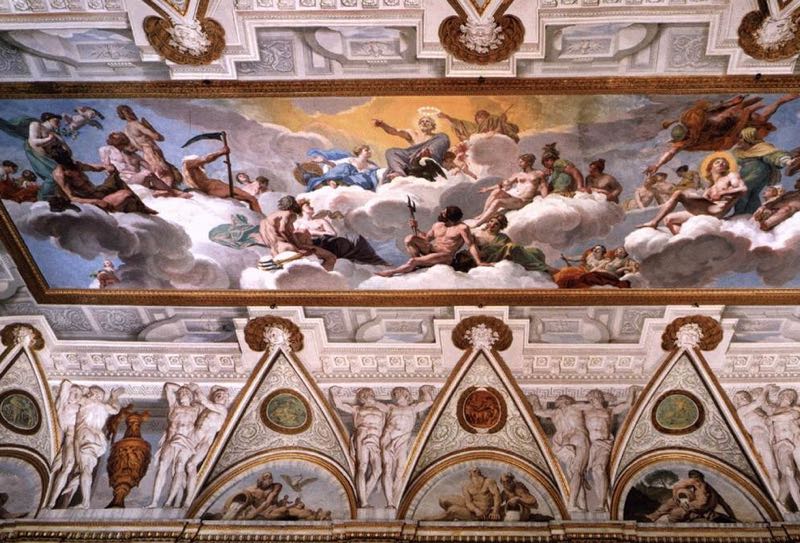 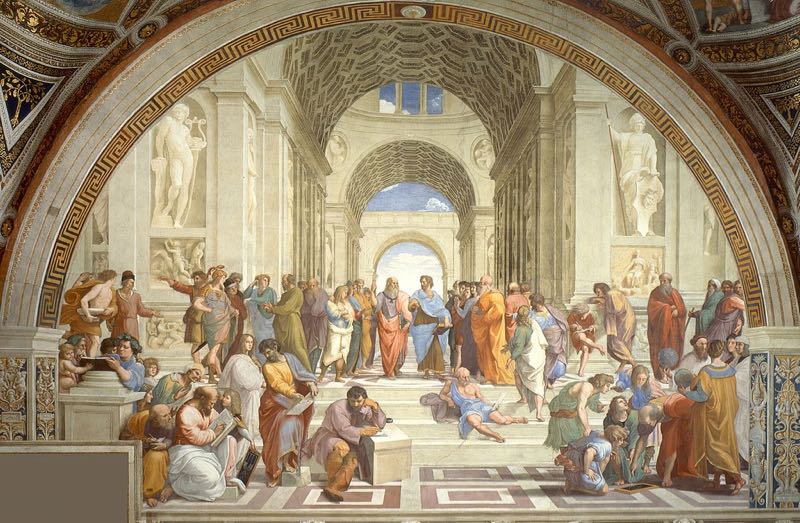 This restored masterpiece exalts reason and truth. Not sure why it’s in the Vatican. I thought Jesus was the truth. Plato is seen in the centre of the painting pointing his forefinger upward to the sky, to the realm of the Gods. In his company is Aristotle who uses the palm of his hand to stress the importance of physical reality.

Overlooking everyone is a statue of Apollo in the high-left corner, together with Athena in the high-right corner. It teaches you that the true Gods and Goddesses are on side with the thinkers, not the dogma worshippers. It reminds everyone that the world is round, not flat as the papacy once believed. This is why there are round globes in this masterpiece.

At the very least this painting is a strong sign that even the Vatican isn’t sure about the power of the Greek Gods and Goddesses.

Raphael’s Parnassus – The Stanza of the Signatura

Apollo and the nine muses are surrounded by a gathering of poets. Everyone loves listening to Apollo. 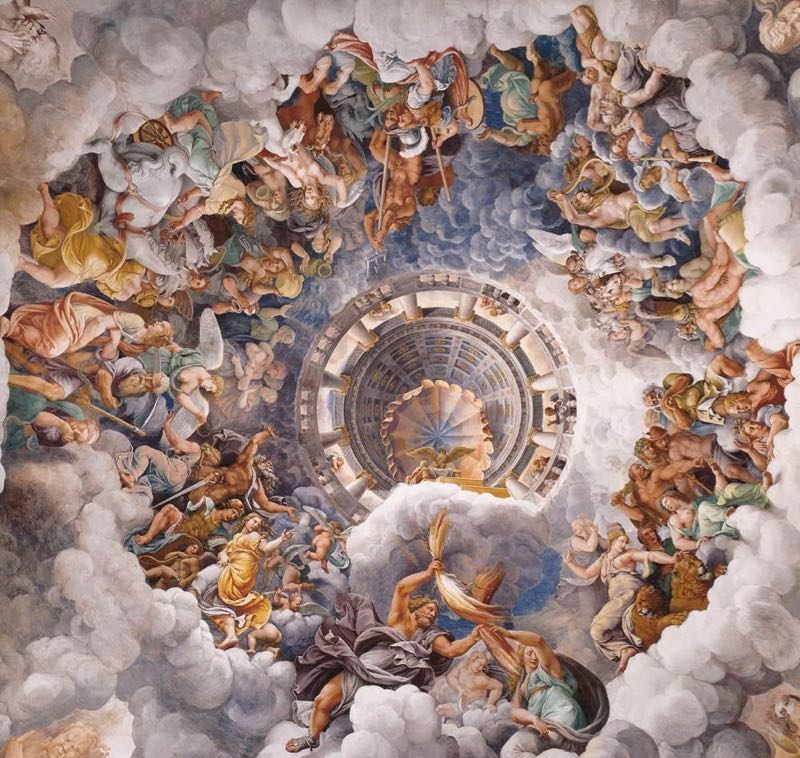 Zeus presiding over all the Gods 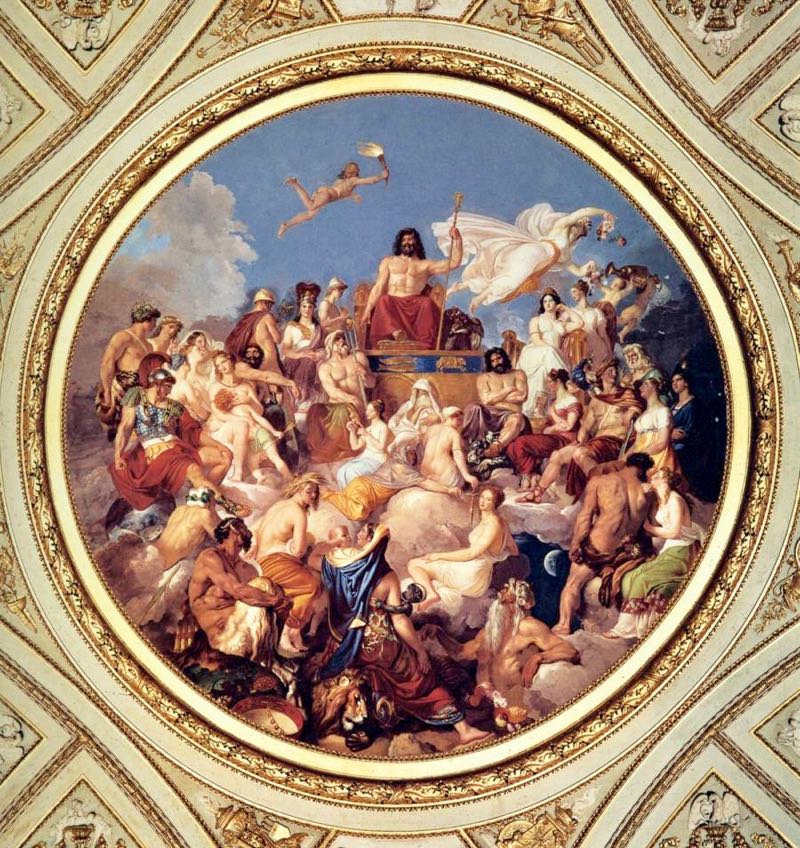 The wedding of Hercules and Ebe

The Birth of Venus 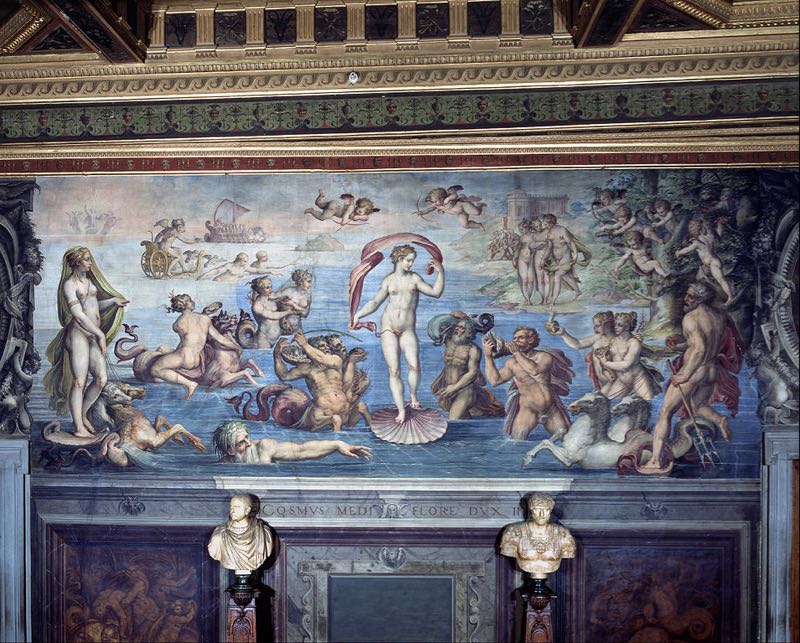 Frescos adorn the ceiling of the Sala del Consiglio dei Dieci (Hall of the Council of Ten). One of the most striking examples is an oval canvas painted by Paolo Veronese between 1554 and 1556, which depicts Jupiter (aka Jove) or Zeus hurling Thunderbolts at the Vices.

The rectangular painting on the right was created by Giambattista Ponchino in 1553 and is titled Mercury and Minerva. 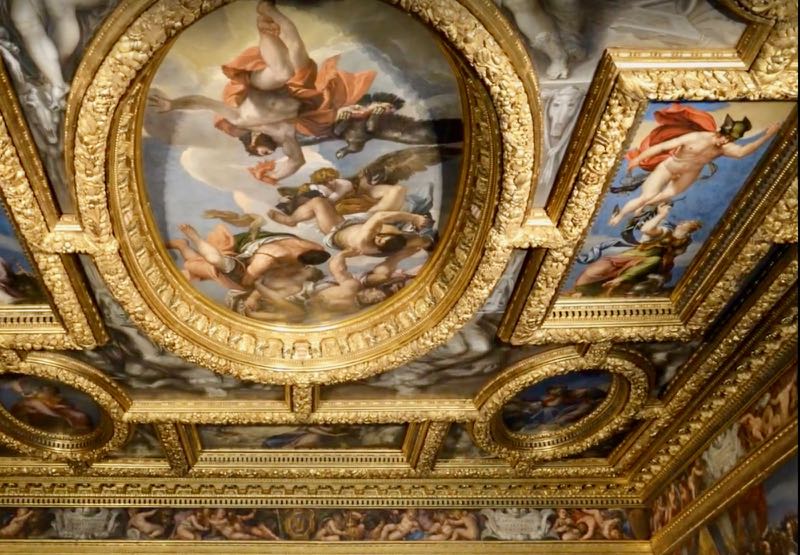 The Council of Ten from which this room gets its name from was actually set up after a conspiracy in 1310, when Bajamonte Tiepolo and other noblemen attempted to overthrow State institutions. The Council ended up controlling all sectors of public life. They dished out reward and punishment as they saw fit.

The oval painting in the centre is a actually copy of the Veronese original, which Napoleon had taken to the Louvre.

Below is a ceiling painting of Mars and Neptune. 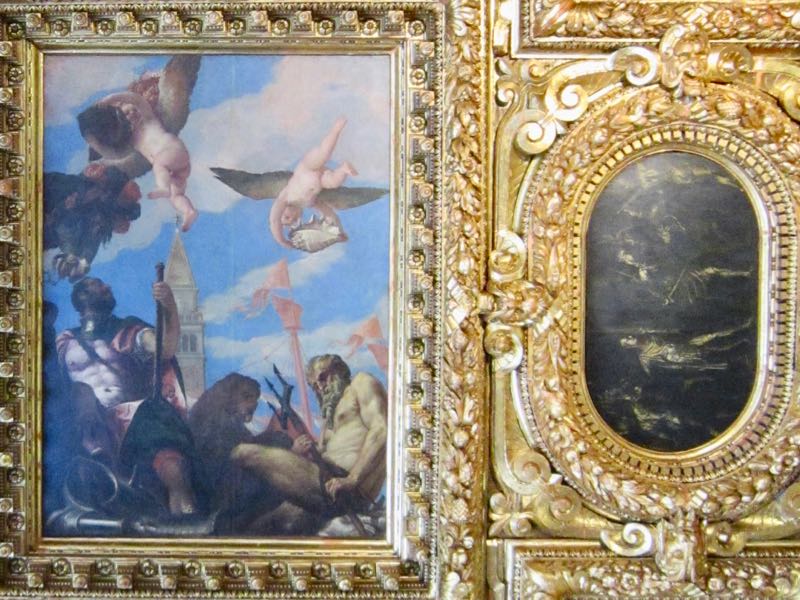 Neptune (Poseidon) Offering Gifts to Venice by Giovan Battista Tiepolo is one of the paintings in the Doge’s Palace. The painting was completed in 1750. It’ss seen as a symbol of the wealth and power of the Republic of Venice based on their control of the sea.

The powerful Venetians obviously wanted to believe the Greek Gods were on their side.

Neptune is seen in the Hall of the Four Doors.

In the painting below, the Doge’s Palace can be seen in the centre. One of the ceremonial duties of the doge was to celebrate the symbolic marriage of Venice with the sea. This was symbolically done by casting a ring from the state barge, the Bucentaur, into the Adriatic. 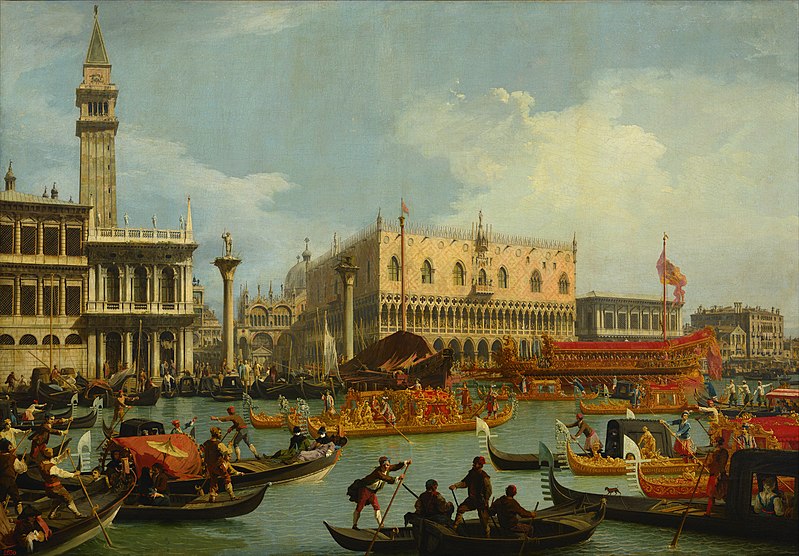 The impressive palace has a flight of stairs which once led to the Doge’s private quarters. You can see statues of Mars and Neptune standing guard at the top.

The Academy of Sciences has rooms and ceilings decorated with frescoes telling the story of Ulysses (Odysseus).

Now you know where to go in Italy if you’re wanting to look at the Greek and Roman Gods.