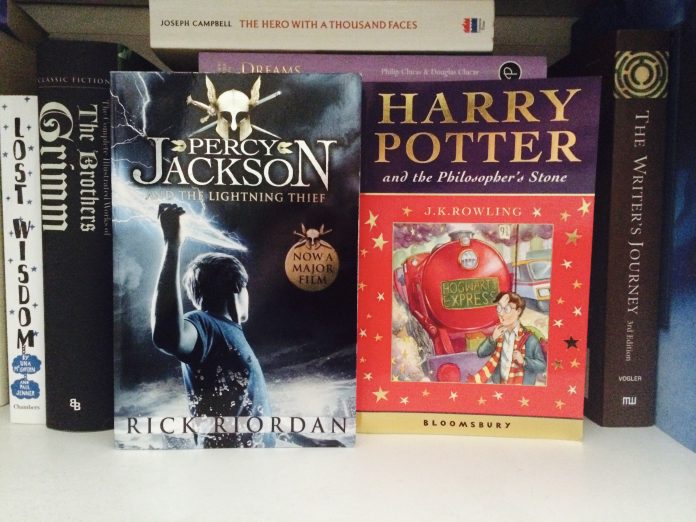 Harry Potter has a scar on his forehead shaped like a bolt of lightning.

The thunderbolt belongs to Zeus.

Early on in the story, Harry Potter receives a letter from Minerva McGonagall, the Deputy Headmistress of Hogwarts School of Witchcraft and Wizardry, informing him of a place at Hogwarts.

Minerva, remember is the Roman name of Athena, the Goddess of Wisdom. In the letter, it mentions that an owl is awaited by a certain date. An owl is considered to be a holy bird of the Goddess Athena.

Hagrid used the expression ‘Gallopin Gorgons’ when he remembered something very important. At the same time he clapped his hand hard onto his forehead.

In Greek mythology, Athena is said to have sprang fully formed and fully armed from the head of her father, Zeus. Zeus had swallowed the pregnant Metis. Some think Hephaestus, the God of Engineering, assisted in the birth with his axe, by cracking open the head of Zeus.

Hagrid pulls out an owl from his overcoat pocket. He writes a reply letter, rolls it up and gives it to the owl. The owl clamps onto it with its beak and after being thrown out the door, it flies away.

The mention of the word Gorgons right after Harry’s invitation, suggests that this could be another Greek myth in the making. The Gorgons in Greek mythology were three frightful sisters named Sthenno, Euryale and Medusa. They had snakes for hair and their look turned people to stone. Medusa, the only one to be mortal, possessed great beauty in her life but was punished by Athena for sleeping with Poseidon, God of the sea. Unbeknown to many, Athena also had a dark side as well. She was considered Glaukopis, ‘owl-eyed’, and Gorgopis, ‘Gorgon-faced’ at times.

On his first visit to the Leaky Cauldron, the famous magic store, Harry met Dedalus Diggle.

Dedalus is the famous inventor and builder of the ancient labyrinth where the minotaur had been imprisoned in Greek mythology.

Hermione was the daughter of King Menelaus of Sparta and Helen of Troy. You can also consider her name the feminine equivalent of Hermes, the Greek God of Travel.

Gryffindor takes its name from the legendary griffin, which has the beak and wings of an eagle and the body of a lion. Apollo rode a griffin.

The caretaker of the school was Argus Filch.

Argus is the 100 eyed giant watchman in Greek myth.

The Caduseus is a golden staff entwined with two snakes. It has a golden sphere with wings on top and belongs to Hermes, the Messenger of the Gods. The Golden Snitch is the top of Hermes staff.

Centaurs could be found in the forbidden forrest.

Centaurs go way back in Greek myth. They were half man to the waist. Below that they had the body of a horse. They can be seen in many ancient artworks. Chiron is the most famous Greek centaur. He was known to be a teacher to Achilles and other Greek heroes.

Fluffy guards the trap door leading to an underground chamber. Hagrid, the owner of Fluffy, mentions that he bought the three-headed dog from a Greek chappie he met in the pub.

In Greek mythology, Cerberus is the three-headed dog who guards the gates of Hades, the entranceway to the Underworld.

Fluffy has the same weekness as Cerberus. They both fall asleep when they hear music.

Orpheus played music to put Cerberus to sleep so he could pass by safely when he tried to retrieve his wife Eurydice from the Underworld.

The cloak of invisibility is used by Harry Potter and his friends to sneak around without being discovered.

This is equivalent to the Helm of Hades, otherwise known as the Cap of Invisibility. Hades was known to lend it out on occasion.

Hermes is the Messenger of the Gods.

The young students learn about mandrake.

Mandrake was known as the sorceress Circe’s plant.

The phoenix belongs to Dumbledore.

The phoenix is mentioned by the Greek poet Hesiod (c.700 BCE).

In the Chamber of Secrets, Harry faces off with the basilisk, a giant serpent with the power to kill with its eyes. When seen via a reflection in the Harry Potter storyline, the basilisk petrified its victim stiff.

The basilisk is obviously related to the Gorgon, whose terrifying stare caused death by turning victims into stone.

Sirius Black can transform into a dog at will.

The Goddess Artemis fell in love with Orion. Orion had a pet dog named Sirius. When Orion was accidentally killed he was placed in the heavens as a constellation with his faithful dog. Sirius is the brightest star in the Earth’s night sky and is known as the Dog Star.

Andromeda is also part of the Black family.

Andromeda was rescued by Perseus and later became his wife. Andromeda is the nearest galaxy closest to the Milky Way.

When Harry Potter starts Divination training he purchases a book by Cassandra Vablatsky.

Cassandra was the priestess who foretold of the downfall of Troy. It didn’t help anyone because no one believed her.

A Sybil in Greek mythology was a prophetess often associated with Apollo.

In the Goblet of Fire book, Harry faces a Sphinx in the labyrinth/maze with a riddle.

Hestia and Dedalus help escort Harry’s aunt and uncle to safety in the Deathly Hallows.

Hestia is the Greek Goddess of the hearth and home.