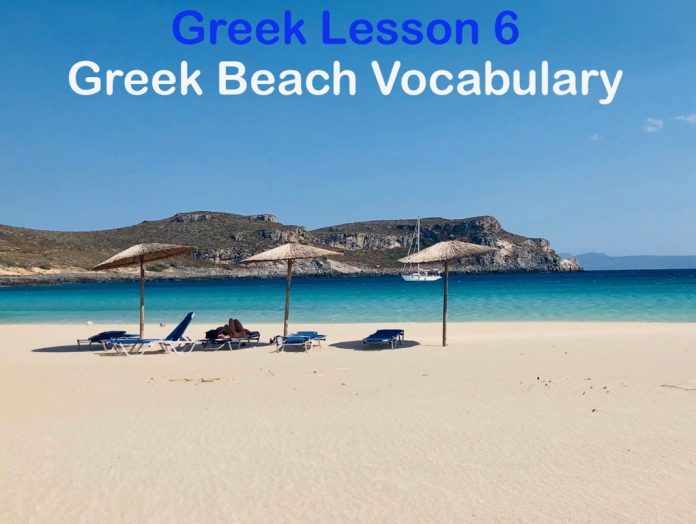 Greek lesson 6 talks about Greek beach vocabulary. It includes the basics such as how to say beach in Greek including the sea and ocean in Greek.

Plus, advanced beach talk, like describing Greek beaches in Greek.

You will also learn to say things that many people do while relaxing at a Greek beach.

For example, what to say at a Greek beach club.

This Greek lesson will also help you identify things you will most likely see at a beach using the Greek language. So you will learn a lot.

Visiting a beach on a Greek island in summer is one of the most enjoyable things to do in Greece.

Wouldn’t your experience at a Greek beach be even better if you knew how to say a few words and phrases in Greek?

It would have to make for a much better experience while you’re soaking up the sun.

Learning how to say many of these Greek beach words, phrases and expressions will make your time on a Greek beach so much better.

So I highly recommend taking the time to improve your Greek beach vocabulary.

Speak the words shown in blue and red text out loud as this is the essential Greek lesson to learn and master here.

Say the words/statements repeatedly (about ten times) when reading them for maximum effect.

Now and then, close your eyes and try to say the words without looking.

To better understand how this methodology teaches you how to speak Greek fast, you can always refer to the detailed introduction in Greek lesson 1 – Greetings.

Hopefully, you’ll be able to use this Greek beach vocabulary while relaxing at a beach in Greece. So let’s get started.

How to say Beach in Greek

First up, let’s learn to say beach, sea, and ocean in Greek. As well as a few widespread phrases that you’d possibly use when going to the beach.

I’m going, to the, beach

Note: You may also hear people saying “stin” instead of “sti” which is the grammatically correct way of saying it. However, TV and mass media tend to ignore the use of the “N” at the end of this word.

George clarified partly by saying: Don’t stress yourself with “Sti” or “Stin.” Generally, nobody pays any attention when speaking Greek if they hear the “n.”

That said, the correct way to say it is “Stin Paralia.”

We are going, to the, beach

Note: Same here. You can just “sti” instead of “stin.”

Describing a Beach in Greek

Here are some Greek beach vocabulary expressions that you may find helpful to know.

the color, of the, sea, is, amazing

the, blue, water, is, very beautiful

When saying “Omorfo,” the “r” needs a bit of emphasis, in a Greek kind of way.

So you’ll need to hear someone speak the word “ómorfo” if you want to pronounce it like a Greek. Listen to it online.

Regarding blue, you see galarzio used here. However, you can say “ble” which also means blue in Greek.

There are no significant differences. The “Galazio” has a more poetic touch, and it’s used for more light-colored water. Both work fine.

Greeks use “Galazio” a lot when it comes to “blue sky.” But also for the sea.

Greeks say both, so it will be correct whatever you choose.

the water, is, perfect

the beach, is, full

Initially, I used “Katamesti,” which I thought meant packed in Greek since I wanted to say “the beach is packed.”

When George reviewed the lesson, he indicated: Packed=Katamesti. You can also use “Gemati” (pronounced yemati), which stands for full.

Katamesti is by no means wrong. It just has more the sense of something that has a specific capacity – the beach probably doesn’t have a concrete number.

Various slang words in Greek describe a packed place, but they can be challenging to pronounce, and some may have a dubious meaning.

Anyway, saying ‘Yem-ati” to describe a place as full is ok.

Things to say at the beach

When visiting a beach, you normally do things. It could be as simple as going for a swim, or getting a suntan. Here are some things you might want to say while at a Greek beach.

You can say “Pao ya Kolibi” as shown above.

I want, to, sunbathe

I want, to, relax

I want, to, get, something, to eat

I want a beer

Let’s get a drink

Let’s stay for the sunset

Things to bring to the beach

When going to a Greek beach, you often have to bring things along with you like any other beach.

Items like a beach towel and sunscreen protection. And don’t forget your sunglasses!

So let’s take a look at a few Greek words related to things that you’ll probably want to take with you to the beach.

The start of the word “anti” means against. You could also say “Andiliako.”

You can also say “Cooler.” The Greeks use the English version all the time.

Trofi can mean food in Greek, but nowadays, Greeks mainly use it for animals, like Skilotrofi (let’s say “Dogfood”).

Clothing for the beach

Most of you will want to wear something at a Greek beach. It could include a:

Pretty much the same as you would say it in English.

Here is another Greek word where the “rr” in “sorrts” needs a bit of emphasis, in a Greek kind of way. It sort of sounds like saying sor-rots very fast.

You will have to hear someone speak the word “sorts” if you want to pronounce it like a Greek. Listen to it online.

When visiting a Greek beach, you will notice familiar sights.

Try and practice saying these words when you see these sights in real life, even if you’re in another part of the world at an English named beach.

That way, you will improve your Greek beach vocabulary.

Trees at Greek beaches (and plants)

Many Greek beaches have trees nearby, so here’s how to say a few tree names in Greek.

Yes, there are palm trees in Greece, especially on the big island of Crete.

The most famous place where there are palm trees in Greece has to be at one of the best beaches in Crete.

The tamarisk tree is one you’ll often see at Greek beaches. In English, it is also called “salt cedar.”

Here is one of George’s responses: Tamarisk. It’s one of the best trees in Greece 🙂 Since they grow next to the sea, we call them Almiriki (or even Armiriki).

Almira is the saltiness, so it’s safe to assume that Almiriki is the “tree of the salt(iness).

In Greece, you will see many beaches with umbrellas. However, you will normally have to pay to sit under an umbrella, especially at the beach clubs.

Speaking a few of these Greek words will assist you in getting a comfortable seat under an umbrella.

Note: Chairs are pretty uncommon in Greece. 99% of the time, it is a sunbed (Xaplostra).

How much, is the, sunbed?

As a reply, you may hear: Kostizei 10 euro tin imera (It costs 10 euros per day)

I would like a, sunbed, near the, shore, please

under an, umbrella, thanks

How much, for an, umbrella?

Random things to say at the Beach (in Greek)

When you’re at the beach with someone, you say stuff. Here are some suggestions:

You are getting sunburnt

Put on some, sunscreen

the sea breeze is, fantastic

the, wind, is, strong

Which, beach, is the best, on the island?

What is, the, temperature, today?

Where do you want to sit?

let’s sit under the, tree

the sunset is, beautiful

Tsekare tin – used when you want one person to check her out.

Tsekarete tin – is used if you talk to many people (because you go with the plural).

Boats you will see at a Greek Beach

When looking out to sea from a Greek beach, you will often see at least one type of boat.

Practice saying these Greek words when you see a boat on the water.

Generally refers to a modern boat.

Generally refers to older and smaller boats, like the ones the fishers have. Includes boats that have oars.

When saying this, the “r” is pronounced in a Greek kind of way.

It is pretty much the same as the English word for a yacht.

Initially, I had porth-mee-o as the Greek word for the ferry. But apparently, that word means ferry terminal.

Greeks also use the word ferry.

i barla – the ball

Greek lesson 6 has shown you many words and phrases related to Greek beaches.

So next time you’re in Greece, try and speak Greek at the beach.

One of the best things to do at the beach is to eat ice cream. So make sure you also speak Greek when ordering ice cream, explained in Greek lesson 5.

Total number of key Greek words/phrases/sentences from all lessons so far: 150

George loves going to the beach like most Greeks, but can you guess George’s favorite food that he enjoys eating while relaxing at the beach?

It’s tomatoes and cheese! You can read all about it in a post like Aegina: Sea In A Bag. You will also pick up a food cooling technique that seems pretty ingenious. 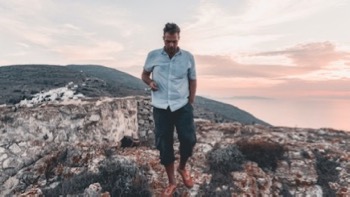 Once again, thank you to George for taking the time to review and improve another Greek lesson. This time about Greek beach vocabulary! 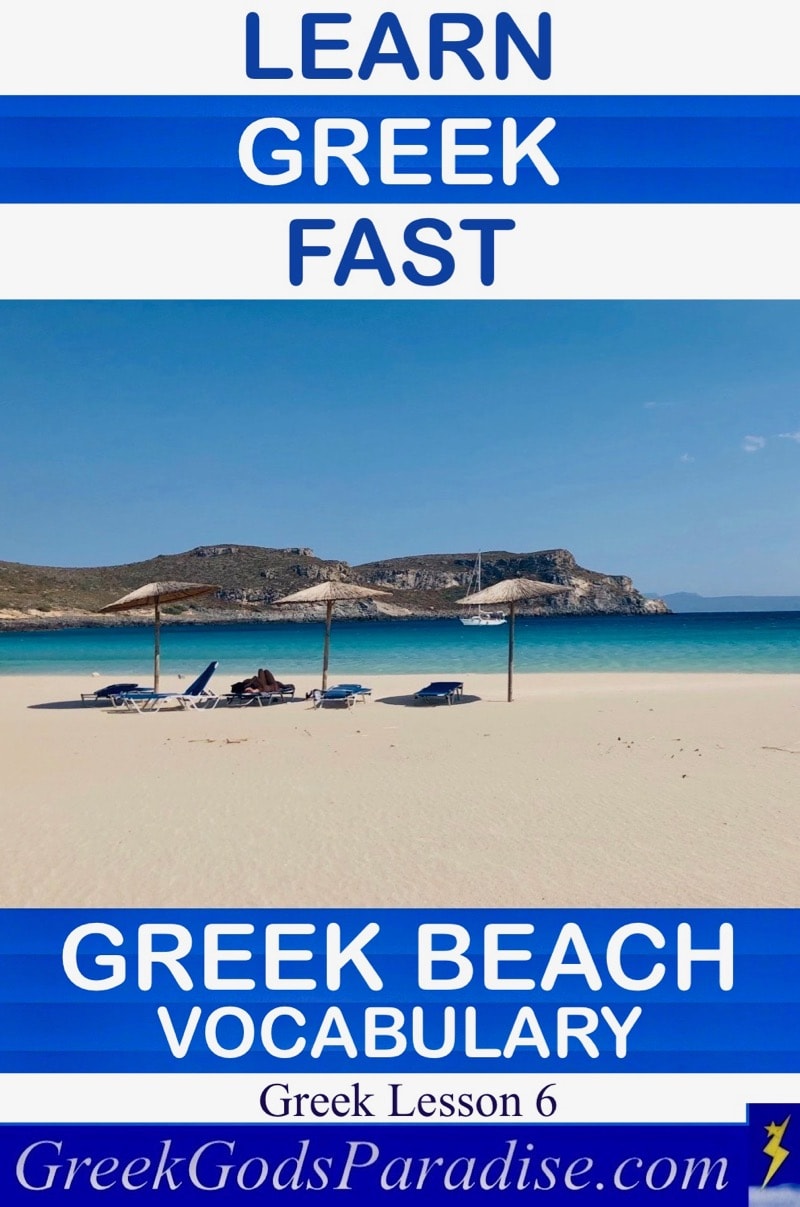 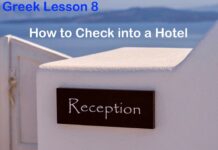 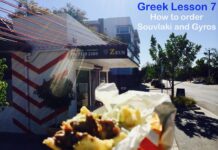 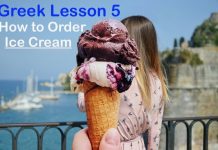 How to Order Ice Cream in Greek