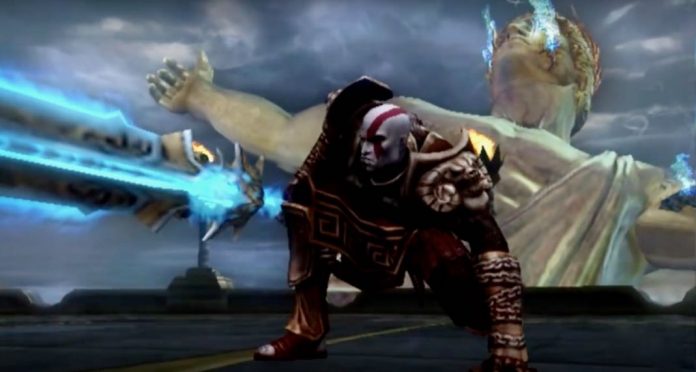 The God of War video game franchise is absolutely amazing. Ares would love it.

Storyline Plot – After Kratos and his Spartan army face annihilation in battle he calls on the God of War for assistance. Ares, the God of War, agrees to help. He saves them from total destruction, but also tricks Kratos into causing an atrocious tragedy, which led to the metamorphosis of Kratos into the “Ghost of Sparta”. Kratos justifiably turns on Ares and goes in search of Pandora’s box after learning that it can help him defeat the God. Along the way the other Olympians provide Kratos with magical powers and special abilities to see the end of Ares, who is destroying Athens. If Kratos can defeat Ares, he’ll become the new God of War.

For a great overview of the story check out this great video.

The original trailer of God of War is also worth watching.

Quest – To find the Sisters of Fate.

Storyline Plot – In this video game, Kratos, has become the new God of War. He’s betrayed though by Zeus, the king of the Olympian Gods, who strips him of his godhood and kills him. Kratos is slowly pulled down into the Underworld, but finds himself saved by the Titan Gaia, who instructs him to find the Sisters of Fate. The sisters possess the power to allow him to travel back in time and avert the betrayal, giving him the opportunity to take his revenge on Zeus.

Characters – Athena, the Goddess of Wisdom; Zeus, the King of the Gods and the main antagonist. Titans include Gaia, Atlas, Prometheus, Typhon, and Kronos. Heroes include Theseus and Perseus (Harry Hamlin). Icarus; the Gorgon Euryale; the zombie of the Barbarian King. Sisters of Fate include Lakhesis, Atropos, and Clotho. Kratos’ wife Lysandra and their daughter Calliope. The Titan Rhea appears in flashbacks. Hades and Poseidon appear in flashbacks of the Great War alongside Zeus, Helios, and Hermes on Olympus.

Settings – The ancient city of Rhodes with a massive statue of the Colossus of Rhodes. The Underworld, Lair of Typhon, Tartarus, prison of the Titans Typhon and Prometheus, and the Island of Creation, which includes the Palace and Temple of Fates, the home to the Sisters of Fate. The island also houses the Temples of Lakhesis and Atropos. The final battle takes place on Mount Olympus, home to the Greek Gods and Goddesses.

For a great overview of the God of War II, you can watch this entertaining trailer.

The video game ends with a climactic battle against Zeus, who in this video game has been revealed to be the true father of Kratos. Father versus son, I suppose it’s similar to what happened in Star Wars the movie.

Here we have the final battle, Kratos against Zeus.

This is the only game in the series to be released as a 2D side-scroller on a non-PlayStation platform.

Storyline Plot – Once again Kratos is leading his Spartan army on a rampage through Greece. In an attempt to stop him, Hera sends a number of beasts led by the giant Argos, while Zeus sends the messenger Ceryx, the son of the god Hermes. Argos is killed but it looks like Kratos did it and defied the Gods. Kratos must find the perpetrator before all of the Gods turn against him.

Storyline Plot – Takes place during the ten years of service Kratos gave to the Greek Gods. Kratos is sent to defend the city of Attica from the invading Persian army. The Spartan soon spots a basilisk climbing over the city walls, however after defeating the basilisk, the sun falls from the sky, plunging the world in darkness. The land is covered in black fog by Morpheus and Persephone has plans to use the Titan Atlas to destroy the world. Can Kratos save the day?

Characters – Kratos; Athena; Eos, the Goddess of Dawn and sister of Helios; Persephone, the Queen of the Underworld; Atlas, the Titan imprisoned in Tartarus. Kratos’ deceased daughter briefly reunites with him in the Fields of Elysium. His wife Lysandra appears in a flashback. Helios, the captured Sun God; Charon, the ferryman of the Underworld; and the Persian King, who is the leader of the Persian forces attacking Attica. Unfortunately you won’t be seeing Morpheus, the God of dreams.

Settings – The ancient cities of Attica and Marathon, the Temple of Helios and the Caves of Olympus. Underworld realms include scenes at the River Styx, Tartarus, the Fields of Elysium, and the Temple of Persephone.

For a great overview of God of War: Chains of Olympus, check out this great video.

Here’s another great trailer for God of War: Chains of Olympus.

In the video game video below, you can see the Olympus Bosses.

Storyline Plot – Kratos and the other Titans ascend Mount Olympus to destroy the Olympian Gods.

Settings – Mount Olympus, the Tomb of Ares, the ancient city of Olympia, the Path of Eos, the Labyrinth, the Palace of the Gods including the Forum, Hera’s Gardens, and the chambers of Poseidon and Aphrodite, as well as the Underworld and Tartarus.

Here are some more video games based on Greek mythology.