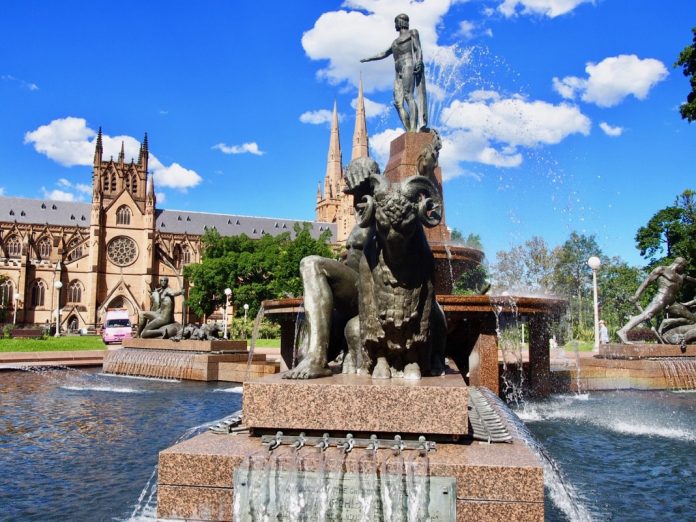 The Archibald Fountain featuring Apollo in Sydney would have to be the most beautiful fountain in Australia.

Believe me, this water fountain with Greek mythology themes and multiple bronze statues is extraordinary.

Some countries have fountains depicting a particular Greek myth or a Greek God.

However, not many of them incorporate reminders of Greek mythology and classical Gods and Goddesses within the same fountain.

It isn’t easy to comprehend why, but strangely enough, Australia is one of those exceptions.

This proves that Australia has a classical cultural side to it, which not many people know about, especially compared to other countries around the world.

Sydneysiders love it, though it’s still a bit of a secret from the rest of Australia.

The beautiful water fountain doesn’t match the fame of the Apollo fountain found at the Palace of Versailles in France.

But maybe one day, it will be just as revered. Let’s hope so anyway.

If you haven’t seen it, I’m sure you’ll become a fan of the Archibald Fountain once you’ve seen it in all its glory.

This fountain is in a beautiful spot in Hyde Park in a public garden setting.

I really believe that this fountain is one of the best attractions in Sydney. It’s definitely worth visiting, even if you’re only in Sydney for one day.

If you’re lucky enough to be in Sydney, make sure you head to Hyde Park so you can see the Archibald Fountain for yourself. I’m sure you won’t be disappointed.

Apollo and the Archibald Fountain

Within the Hyde Park public garden, you’ll come across Apollo, God of light, standing in the highest position in the center of the Archibald Fountain.

The Greek God is shown with one arm outstretched, while in the other arm, he’s holding a lyre, his most prized musical instrument. Apollo is the God of music, so it’s a nice touch.

Following a Y-shape around Apollo, you’ll also see three other linkages to Greek mythology within the Archibald Fountain. These sculptures appear in the lowest and largest basin.

Diana, the huntress, twin sister of Apollo, is in one of those sculptures that make up the Y-branches.

The Greek and Roman Goddess, known as Artemis by the Greeks, can be seen holding her bow next to a deer and a couple of hunting dogs.

In another Y-branch of the Archibald Fountain, there’s a reminder of one of the most memorable Greek myths of all time, that of Theseus and the Minotaur.

Theseus is seen holding the half-man half-bull by one of its horns. The other hand of his is holding a sword. This is presumably is the moment before he’s about to slay the monstrous beast.

Then there’s a Pan group of sculptures in another Y-branch of the water fountain. This most likely symbolizes Australia’s friendliness towards the nature god from Greek mythology, who possesses goat-like features.

You can find various sculptures, monuments, and fountains honoring Greek mythology in Australia, but the Archibald Fountain would have to be the best of the best.

Apollo can be found at other locations around Australia. For instance, you can find a golden statue of Apollo at one of the museums in Adelaide celebrating Greek art.

That said, the Archibald Fountain contains the most famous sculpture of Apollo in Australia.

Why is this fountain called the Archibald Fountain?

Some people refer to this magnificent water feature as the Apollo fountain, but its proper name is the J. F. Archibald Memorial Fountain.

This magazine covered topics from politics and racist propaganda to bush culture, mainly for white folk. Looking back, some of the writings and cartoons were very racist.

It was published from 1880 to 2008, making it one of Australia’s longest-running magazines. In that time, it obviously changed track depending on the times.

When Archibald died in 1919, he left a substantial amount of money in his will to build an amazing fountain for the cultural benefit of the nation.

The man is also responsible for creating one of Australia’s greatest art prizes, a yearly prize for portraiture art, known as the Archibald Prize. Winners are generally portraits of famous Australians.

He gave the cultural gift of the fountain to the people of Australia to help commemorate joint efforts between Australian and French troops in the First World War (1914 – 1918).

One of the things Archibald stipulated in his will was that it had to be created by a French artist.

François-Léon Sicard became the chosen artist, and he worked on it in Paris. After completion, it was shipped to Australia.

It was inaugurated on 14 March 1932 in Hyde Park, just five days before the opening of the Sydney Harbour Bridge.

Theseus and the Minotaur form a part of the Archibald Fountain.

It’s one of the biggest surprises you’ll see at the Archibald Fountain because it almost seems out of place.

Then again, in this ancient Greek myth, the hero Theseus killed the Minotaur and ended the terror. 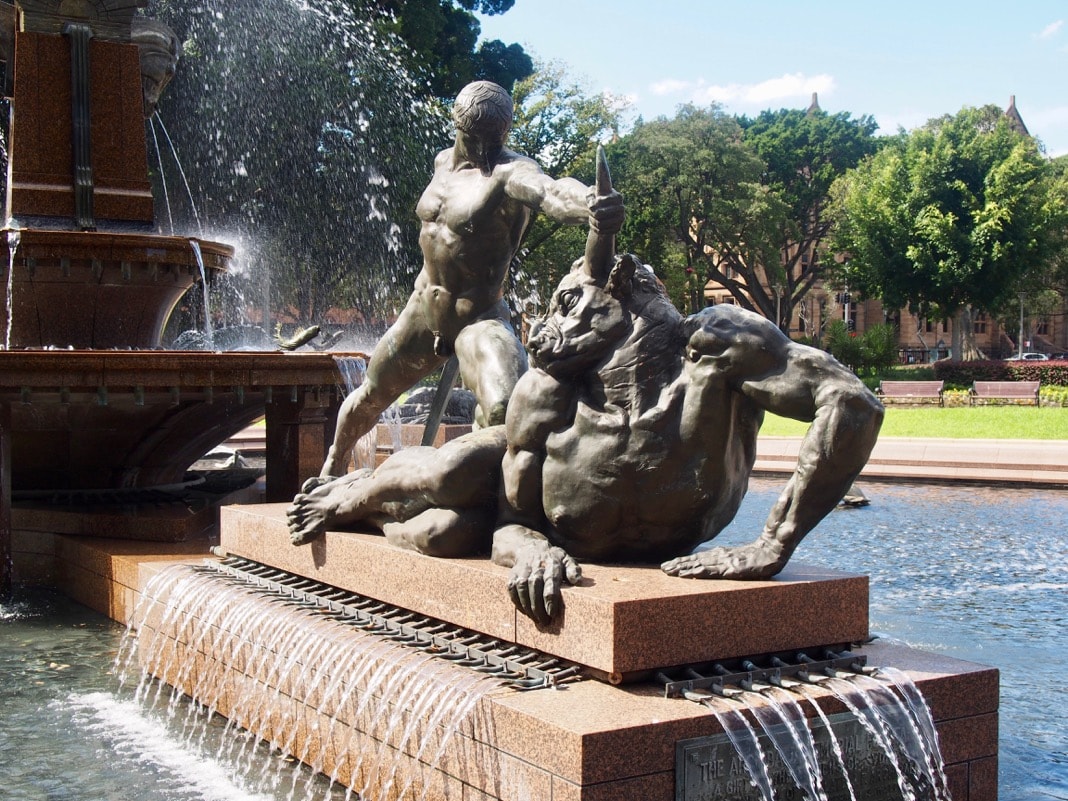 The myth has many noble things about it, such as sacrificing for the greater good.

It also has the grace of offering and receiving much-needed assistance to help someone escape and hopefully end a hellish tyranny.

In the myth, the hell hole was the Minotaur’s labyrinth, but in reality, it could easily symbolize other life-threatening ordeals, such as that of war.

The truth is that someone willing to sacrifice their own life can save many other lives as a result. It’s food for thought. 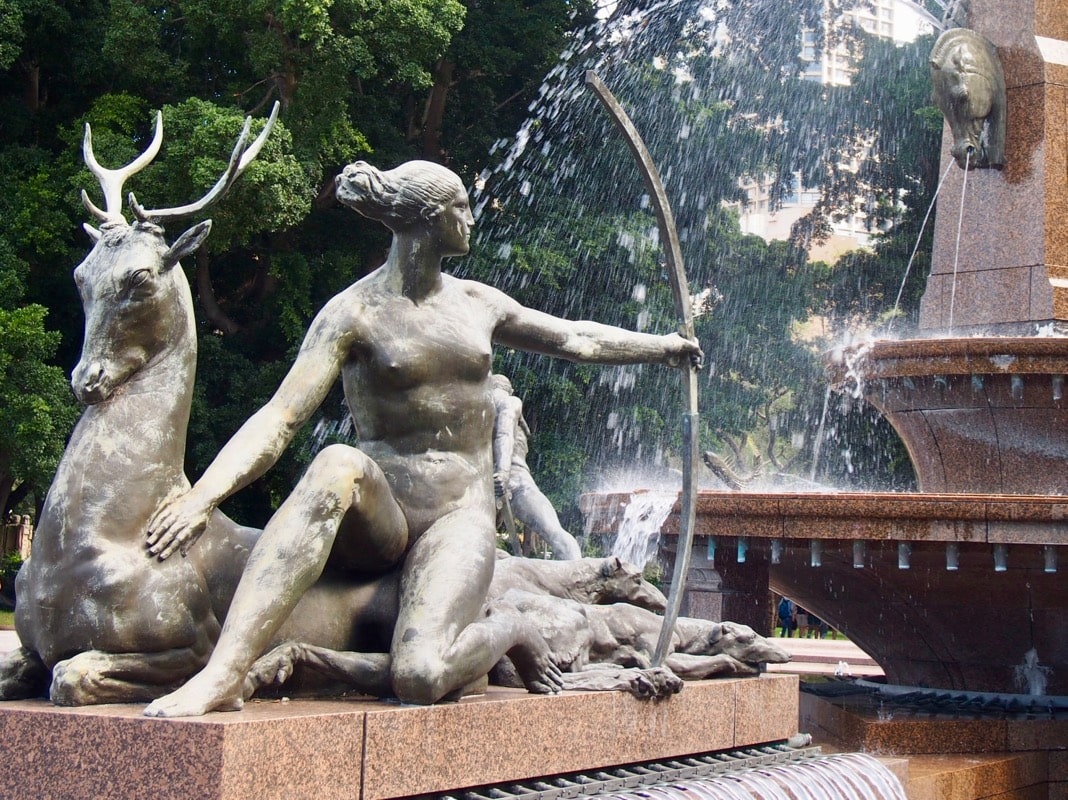 Apollo is very close to his sister, which suggests strong family bonds.

Similarly, France and Australia would have made strong connections during World War 1.

If not, the fountain would most likely never have been created.

The Pan group of sculptures likely represent a friendly hope that nature and harvests would be on side with the people. 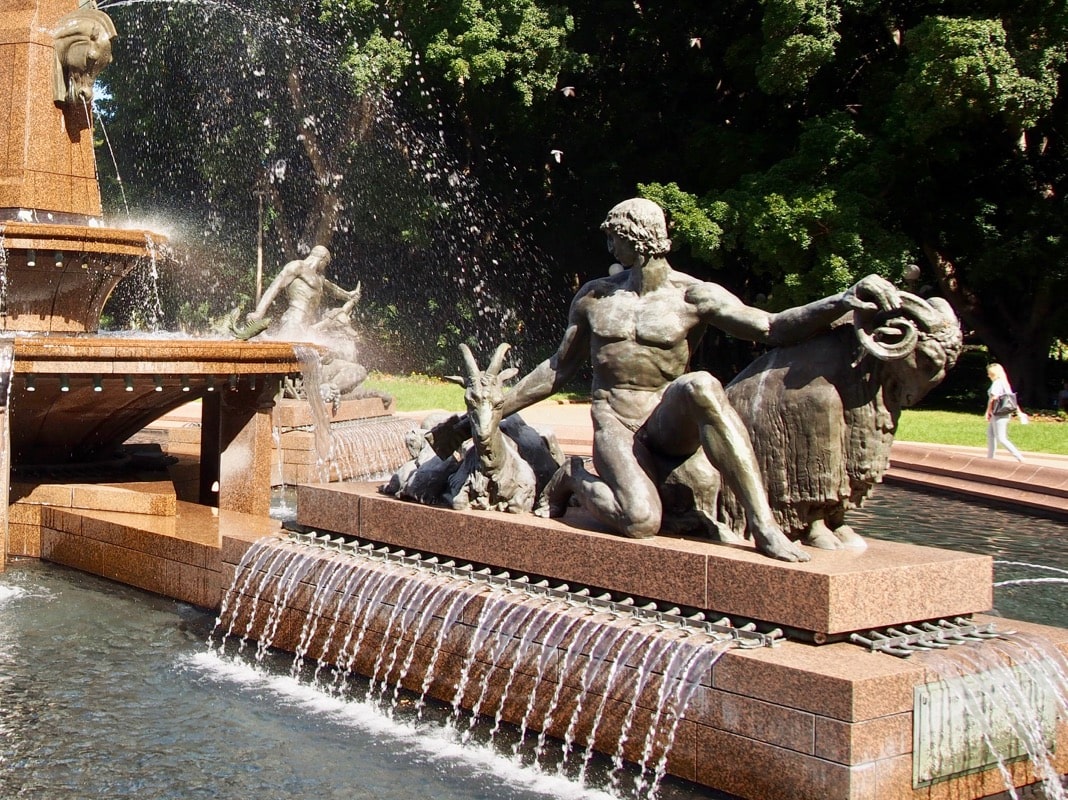 Apollo is the central key figure in the fountain, which is the reason why it is sometimes referred to as the Apollo fountain.

You can see how the three other sculptures forming a Y-pattern around Apollo in the large basin in the photo below. 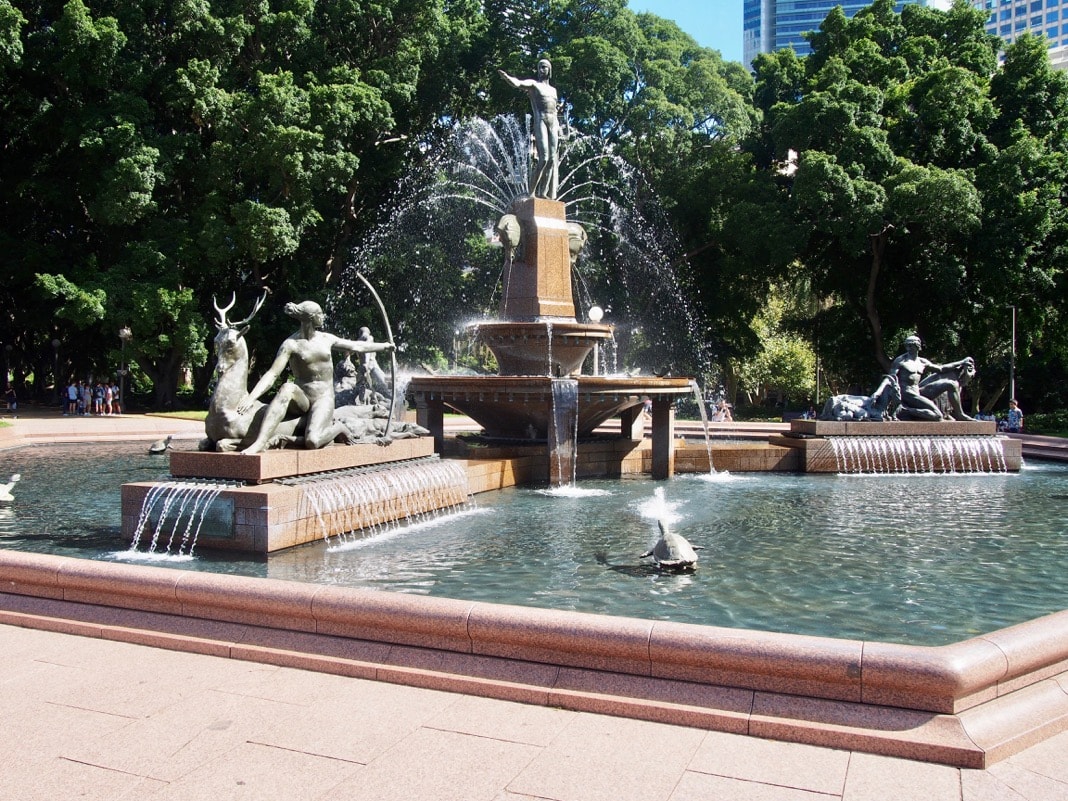 The three sculpture groups include Diana (Artemis), Theseus/Minotaur, and the Pan group of sculptures.

Water spraying out to the side of Apollo in a semi-circle motion represents the rising sun.

You can also see water jetting out of horses’ nostrils in the Archibald Fountain a little below from where Apollo is standing.

The heads of the horse represent the horses of Apollo’s chariot. 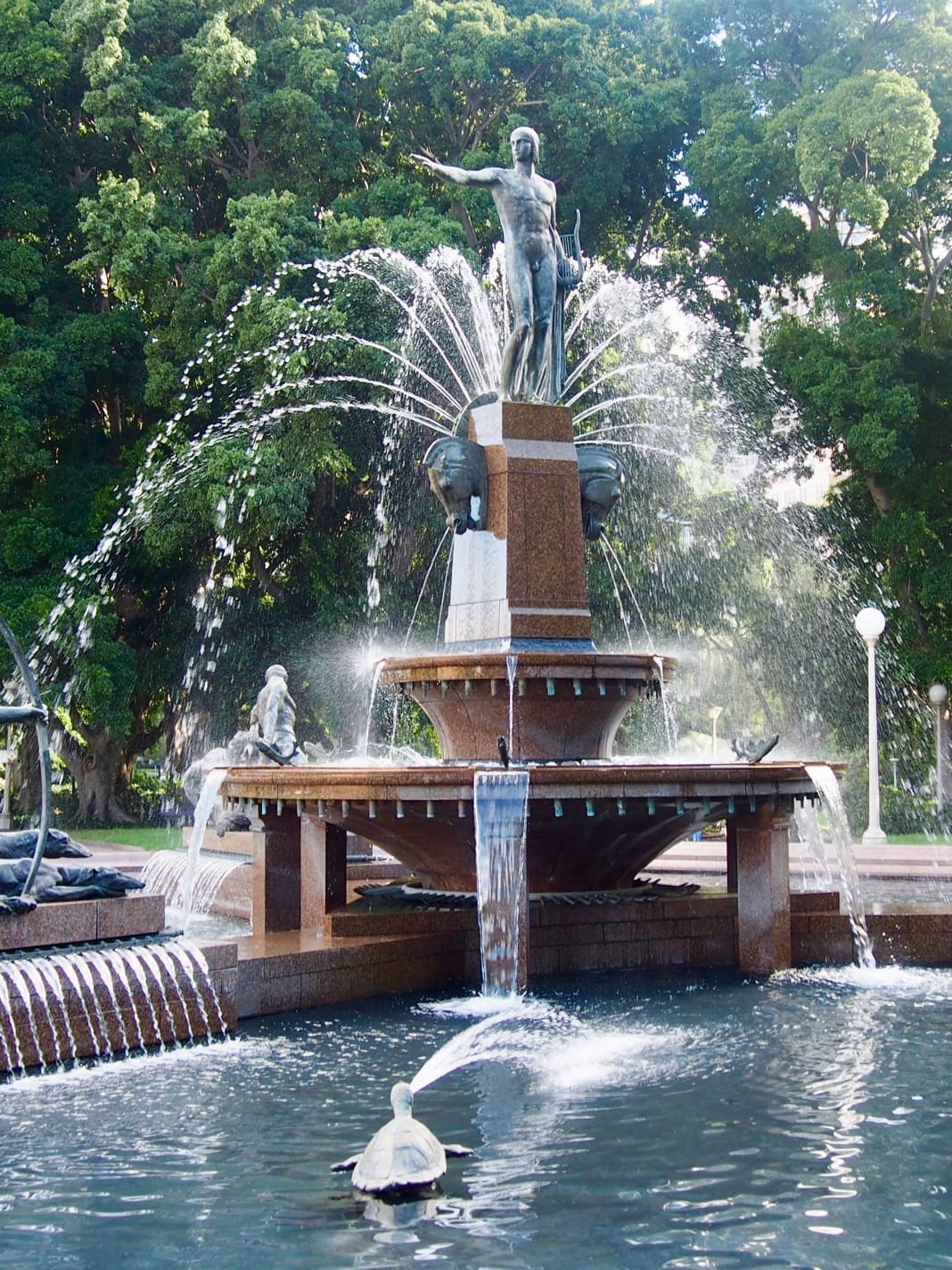 The Archibald Fountain also has six tortoises that spurt water in the fountain. The fountain has a hexagonal shape, so it makes sense, one for each side.

One of Apollo’s hands is outstretched facing in the direction of St Mary’s Cathedral.

The featured image at the top of this post suggests that all powers are under Apollo. I wonder if Apollo was purposely designed in this way so that you could take photos in this manner? 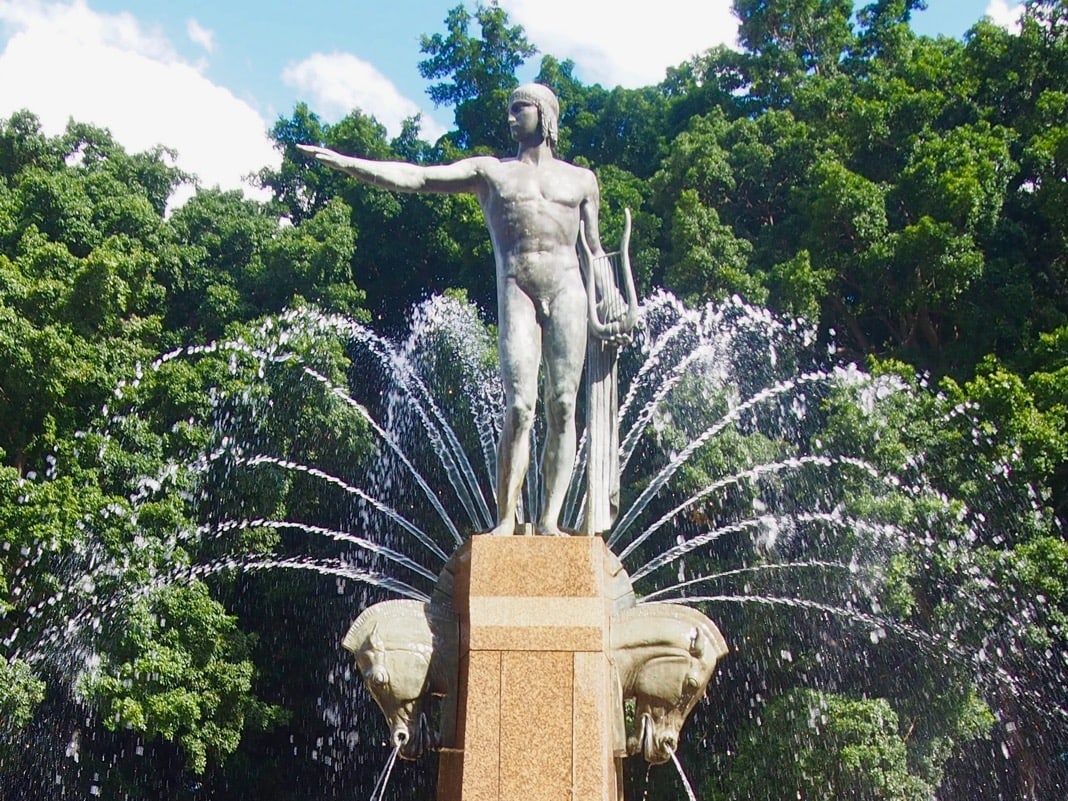 Symbolism of the Archibald Fountain

The fountain has some very symbolic placements.

For instance, the gap between Theseus and the Minotaur appears to line up directly with the entrance to the doorway to the St Mary’s Cathedral. 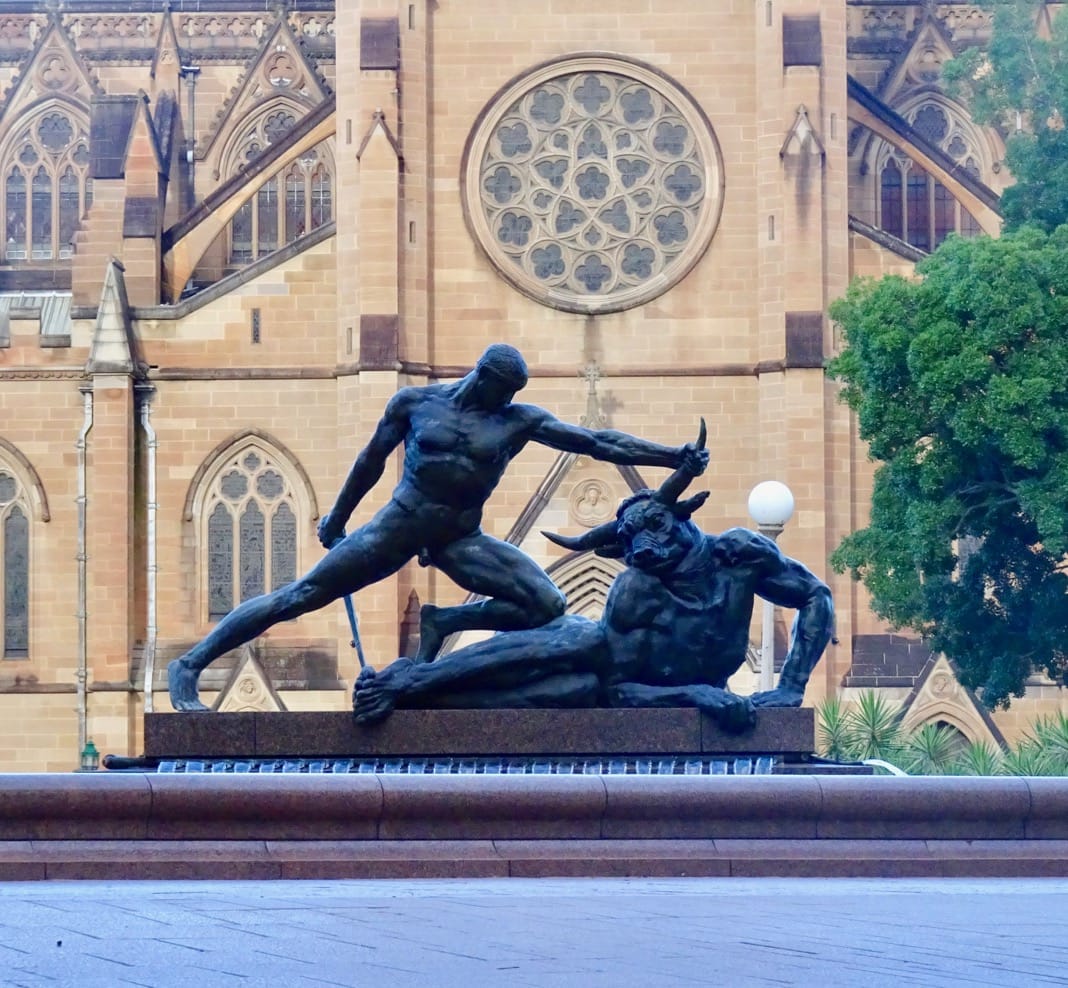 It’s very symbolic in a mysterious kind of way. There seems to be symbolism everywhere you look.

I was hoping to find a sign of Poseidon (Neptune), God of the sea, in the fountain as well, but no luck. Maybe I missed something. A symbol of a trident somewhere would have been great.

There are plenty of Neptune fountains in Italy if you’d like to check some of them out.

Sydney also has a fountain with Neptune, which you can find in the Royal Botanic Garden. You can see it in my Guide to Sydney.

Believe it or not, but the Apollo-11 astronauts visited Apollo as part of their world tour.

They stopped by at the Archibald Fountain on Saturday the 1st of November 1 in 1969, during an official tour of Sydney. Nasa and the Greek Gods go way back.

What to do at the Archibald Fountain?

There is plenty of seating available where you can relax, and it’s a great place for people-watching in Sydney.

You can take photos and sometimes they even have entertainers in the area.

This is also a great spot to ponder over the 12 Greek Myths that Prove the Bible is Fake.

If you’re ever in Sydney, you have to visit the Archibald Fountain to see Apollo. 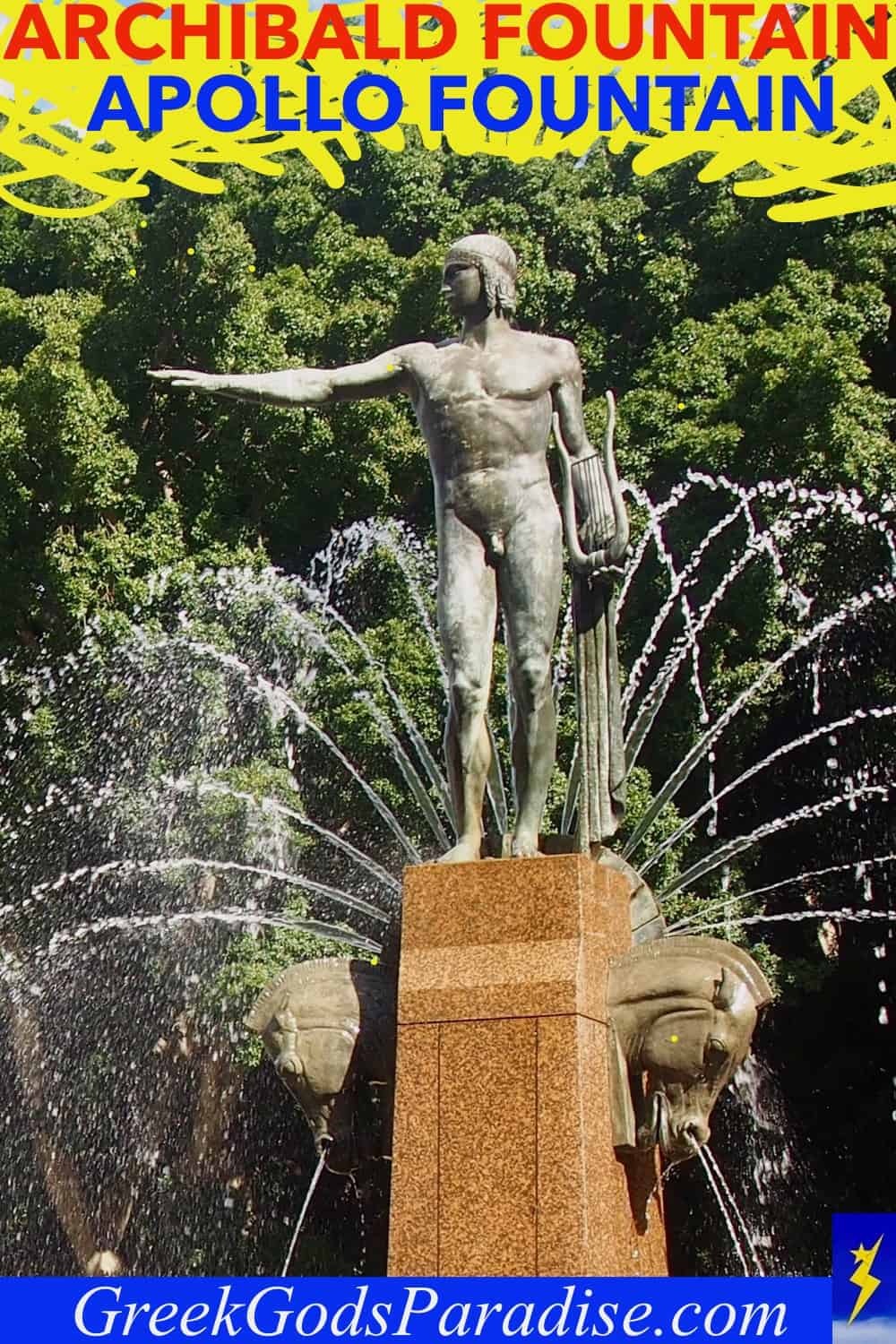