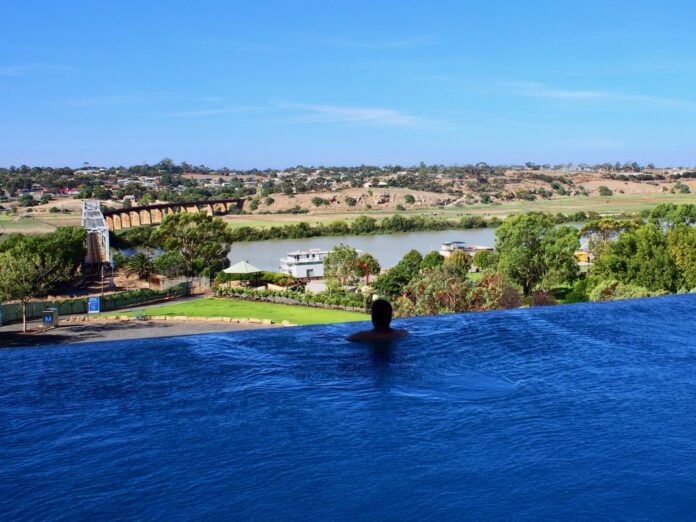 The Murray River is Australia’s longest river, so going on a Murray River day cruise is something to think about if you want to see more of the remarkable Australian landscape.

I have to admit I didn’t know much about the Murray River before planning a two-day trip to Murray Bridge and Mannum.

It all started after winning a $50 accommodation voucher and a $100 Great State Experience Voucher for exclusive use in South Australia.

After some research, I decided to use the vouchers at Murray Bridge.

The riverside town of Murray Bridge is situated right at the edge of the Murray River and is only about an hour’s drive from Adelaide.

It is a popular place for water activities like river cruising.

To top off the experience, I decided to stay at the classy Bridgeport Hotel in Murray Bridge, mainly due to the hotel’s great-looking infinity pool, which seemed to offer stunning views over the Murray River.

Before arriving in Murray Bridge, I also pre-booked a Murray River day cruise.

I spotted a fantastic deal with Captain Proud offering a 3 hour Murray River lunch cruise for only $65 per person.

By using my $100 voucher, the river cruise would only cost $30 for two people.

I’m sure you will agree, that’s an absolute bargain for a river cruise!

My mother agreed to visit Murray Bridge with me, so I planned to spend two days exploring Murray Bridge, the Murray River, and the nearby town of Mannum.

We wandered around Murray Bridge the first day and enjoyed our time at the Bridgeport Hotel.

The next day we did the Captain Proud lunch cruise on the Murray River.

Then when the river cruise finished at 2 pm, we visited the nearby charming town of Mannum.

On the first day of arrival in Murray Bridge, we went for a walk on the Sturt Reserve, which is considered Murray Bridge’s most popular tourist place.

The Sturt Reserve comprises a pathway that includes grassy land that stretches for approximately 1 km along the Murray River.

It is a beautiful and peaceful spot. You will see plenty of people walking there. You can go fishing there or relax and find a comfy place to unwind. 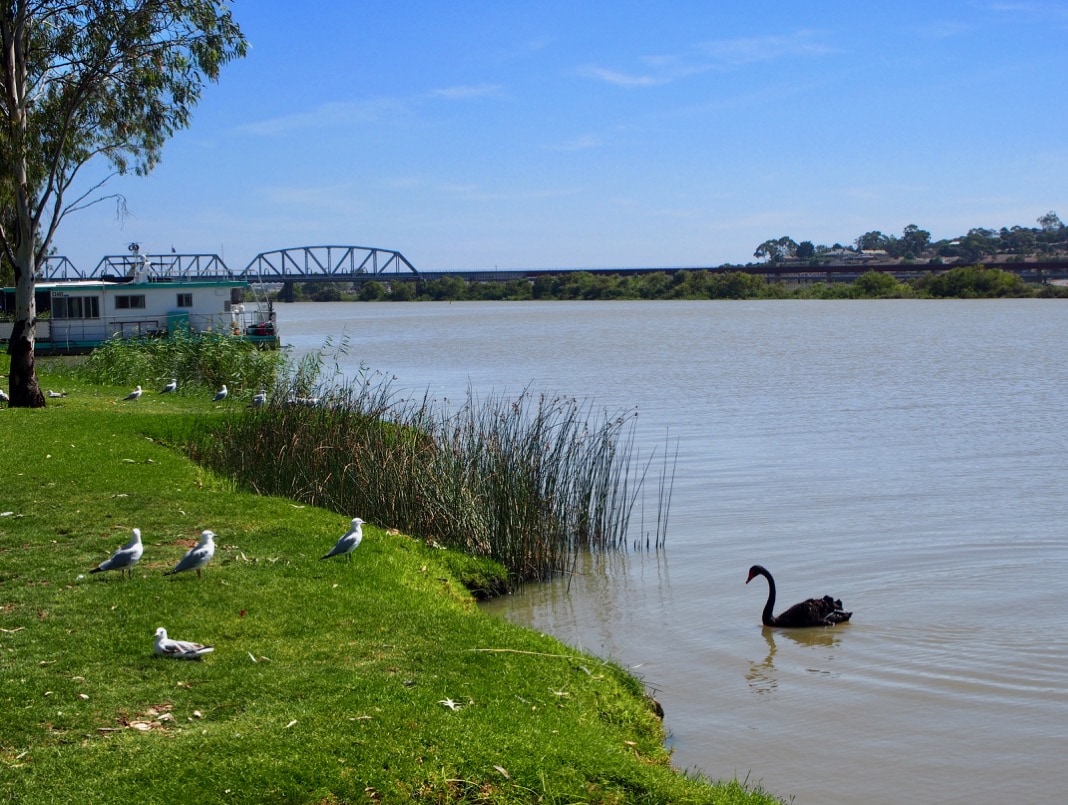 Here is a black swan gracefully swimming on the Murray River.

When visiting Murray Bridge, I never expected to attend a free concert.

You could hear singing very close to the Sturt Reserve, so we walked on over to see what was happening.

The event had a few food stalls around the place, and four singers were singing on a stage, entertaining the crowd.

Initially, the four guys were singing catchy songs about Vanuatu and how it was paradise.

Then, later on, one of their songs included Murray Bridge in the lyrics. I recorded part of the song in the video below.

We left a little while later to go for a walk further up the Murray River.

I saw the four singers eating at a food stall when we returned. So I talked to them for a little while and told them how much I loved Vanuatu. They were happy to hear it.

My mother and I then went for a walk to check out Murray Bridge’s central shopping area.

We walked through a mall and later visited the Murray Bridge Regional Art Gallery, only briefly.

After that, we grabbed a light lunch and took it over to the Murray River so we could eat it on the grass next to the water.

I saw a few people fishing nearby, and they caught a couple of fish. The fish seemed big enough, but they threw them back for some reason.

When I tried to talk to one fisherman, he couldn’t understand English, so I couldn’t find out what type of fish they were.

We checked into the Bridgeport hotel close to 2 pm, and it didn’t take me much longer to visit the infinity pool.

I have to say, the views from the Bridgeport Hotel infinity pool were fabulous. 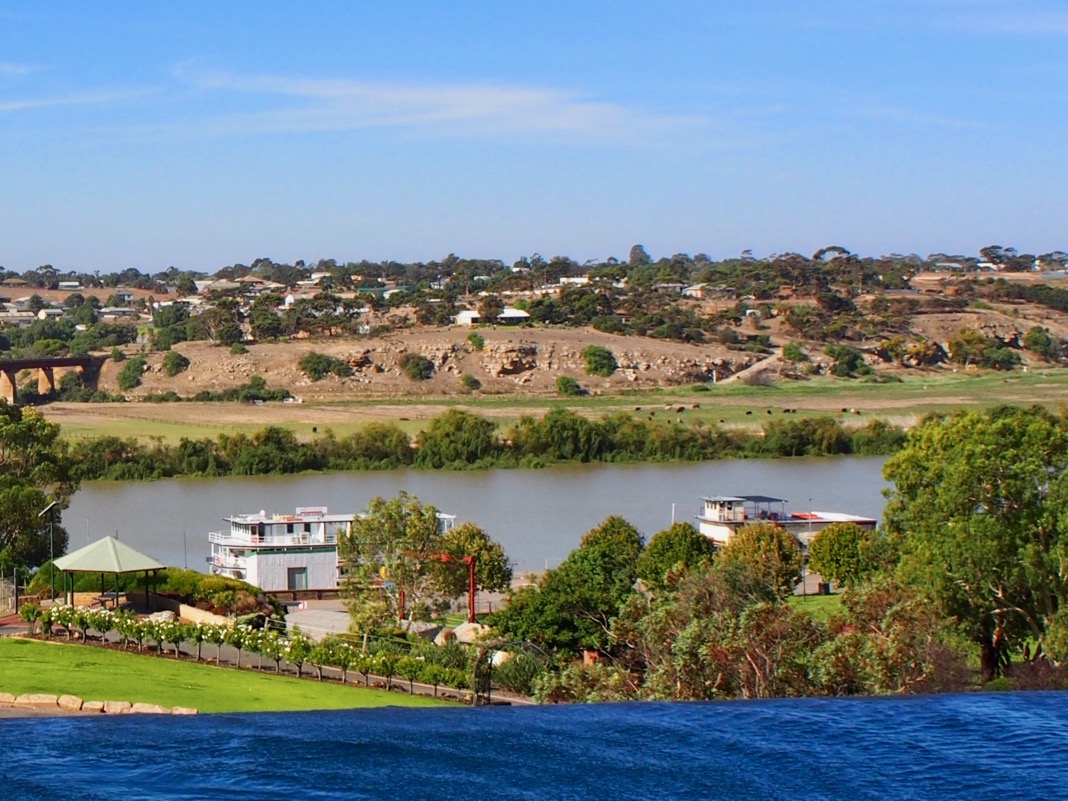 In the evening we went to the Bridgeport Hotel restaurant to have dinner.

The food was delicious. I had a beef schnitzel, and it has to be the best beef schnitzel I have ever eaten. The sticky date pudding for dessert was also incredibly delicious.

The following morning I couldn’t resist going for another swim in the pool. This time around, the pool looked much dreamier. 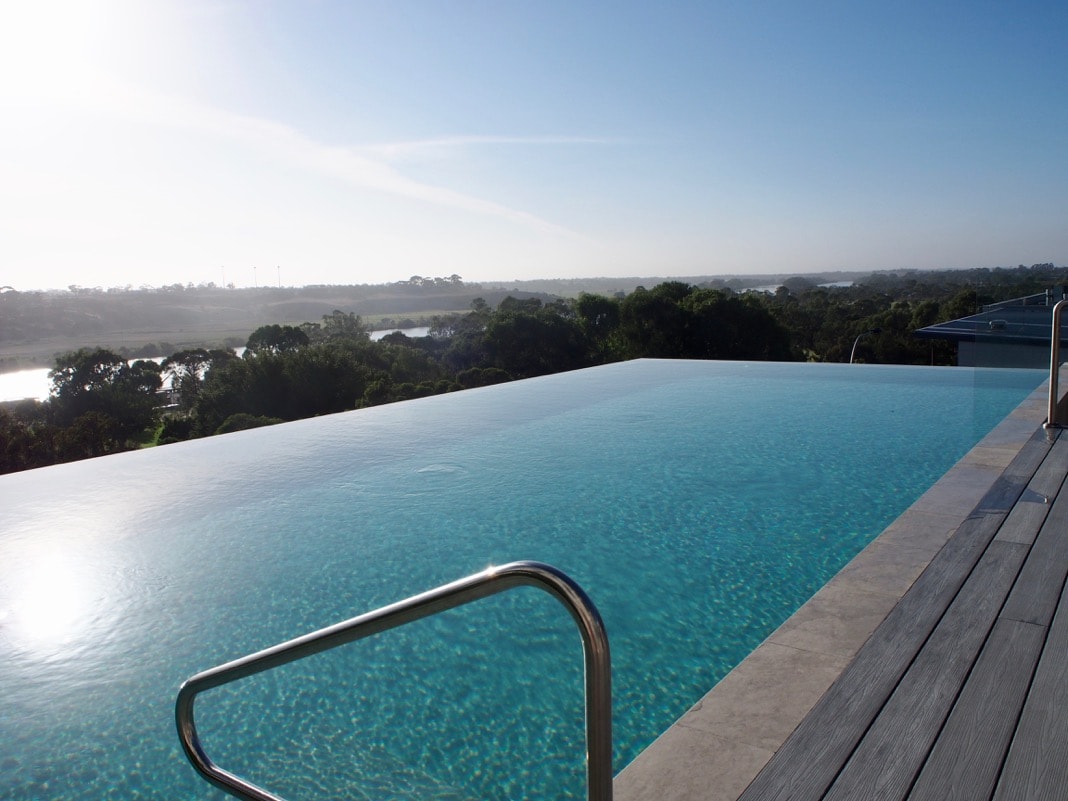 Not sure how the blue water could have changed so much in appearance compared to the previous day.

Though there was a strong breeze on the previous day. Shade coming from some part of the four-story hotel building may have caused the drastic pool color change.

Before going on the lunch cruise on the Murray River, we spent a bit of time walking around under the two main bridges in Murray Bridge. You can see the train bridge on this side. 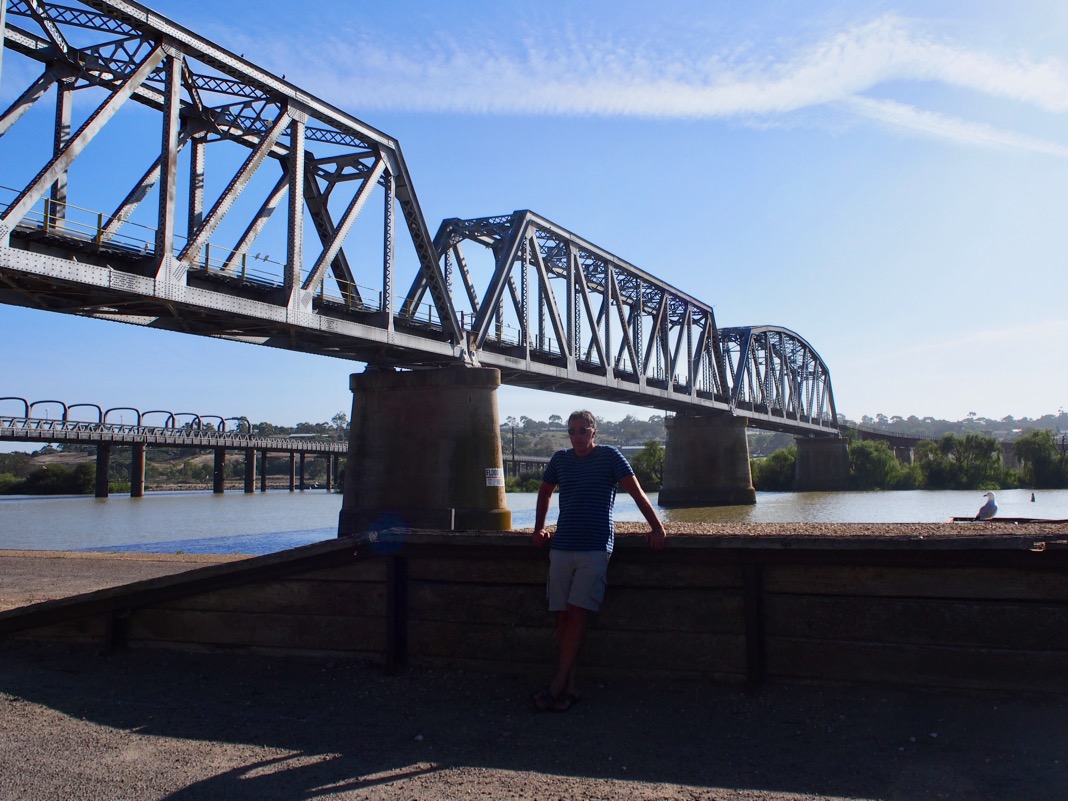 The Captain Proud boat cruise started at 10:45 am. 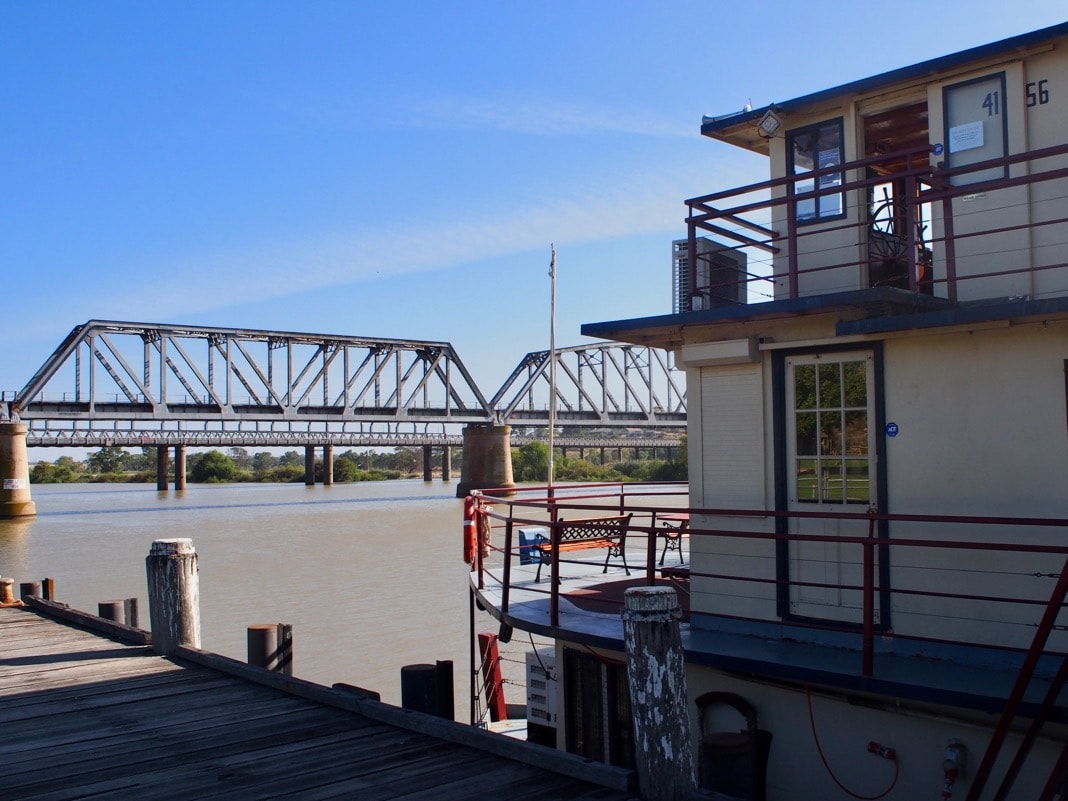 The great thing about the Captain Proud lunch cruise is that included a two-course lunch.

Mum and I both ordered the battered fish and chips. I had the apple crumble with ice cream for dessert, and my mother had a chocolate sundae.

The fish and chips were ok, but I mostly enjoyed the apple crumble with ice cream. It was seriously delicious!

Usually, you would eat on the Murray River as part of the river cruise experience.

But on this occasion, luck wasn’t on our side, because the 240V generator on the boat had recently broken.

That meant we had to spend the first hour on the boat at the dock while they cooked the meals.

One hour later, we departed and headed toward the bridges. It wasn’t so bad.

We journeyed up the Murray River for about half an hour (possibly about 7 km in that direction).

I was pleasantly surprised by some of the beautiful Murray River views as we cruised along the river.

Here is a beautiful spot we passed by, which seemed quite different from the rest of the Murray River. 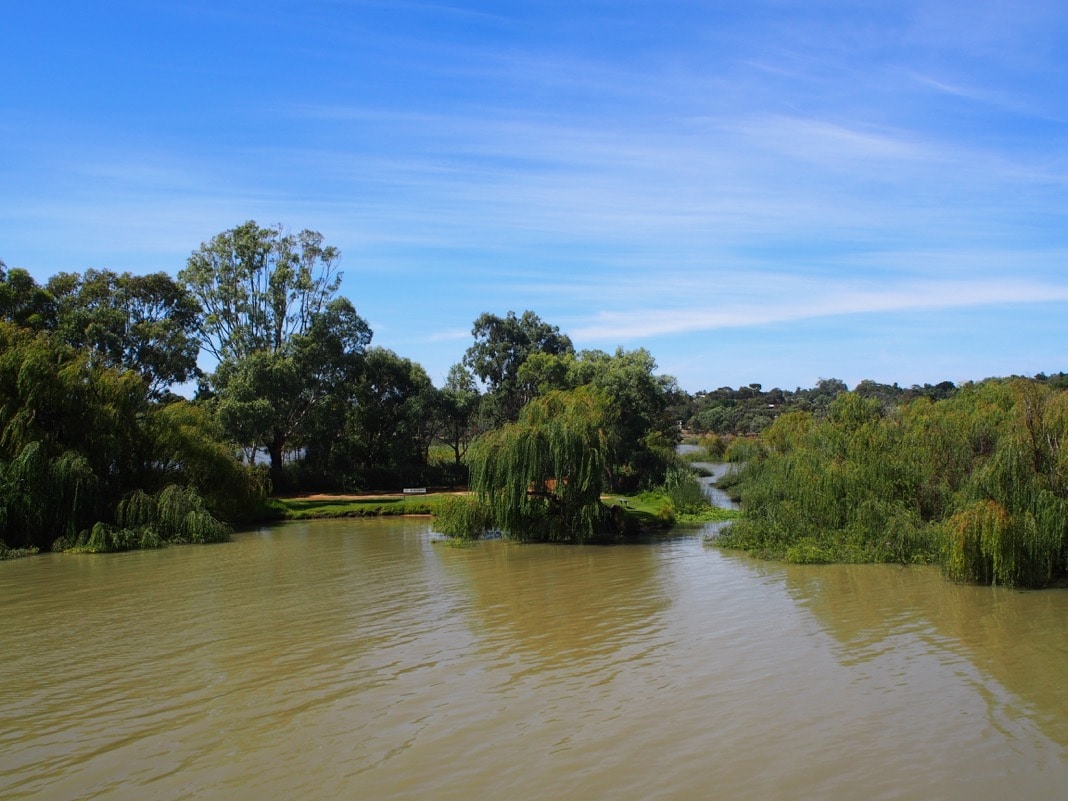 Later on, when returning, we saw a yellow speed boat pulling a young person on an inflatable tube.

They were right in front of the Captain Proud paddle boat and not too far away.

The boat captain even gave them horn toot blast so they’d be sure to get out of the way. 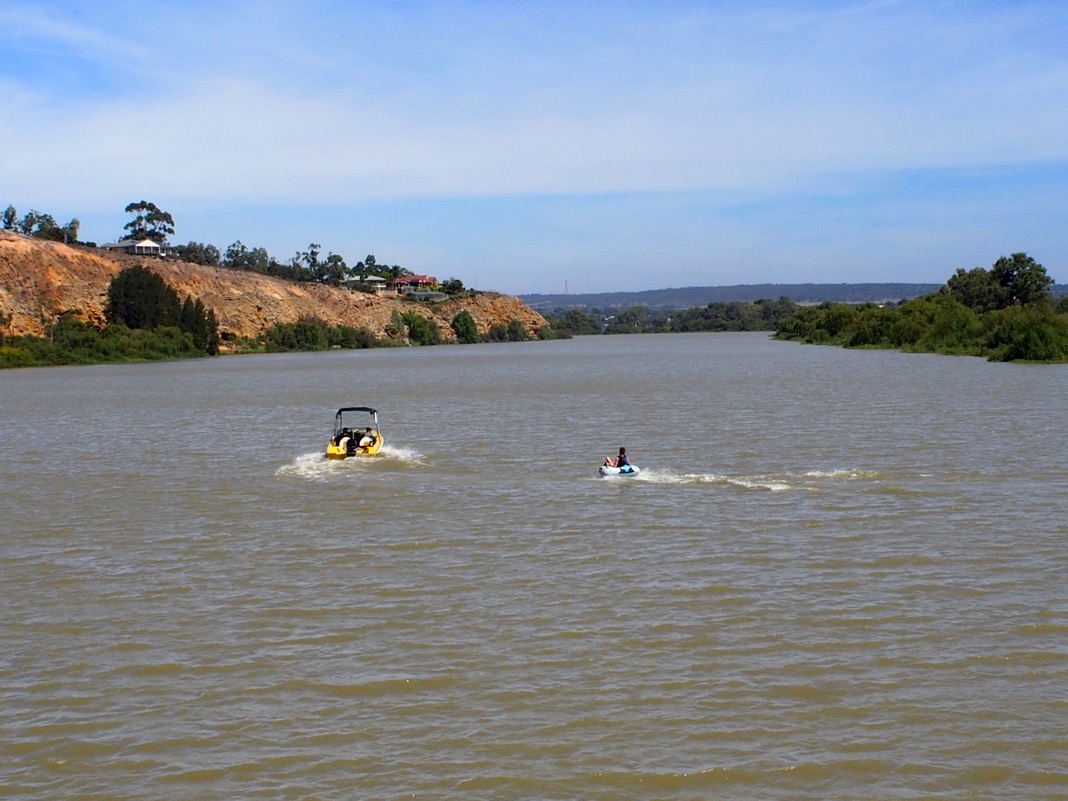 Later on, I even asked the boat captain if I could steer the boat on the River Murray and become the Captain for 10 seconds.

He obliged, so here I am, steering the Captain Proud paddle boat.

On our way back, we passed under both bridges again.

It scared off most white birds that hung out under the train bridge as we cruised toward it. 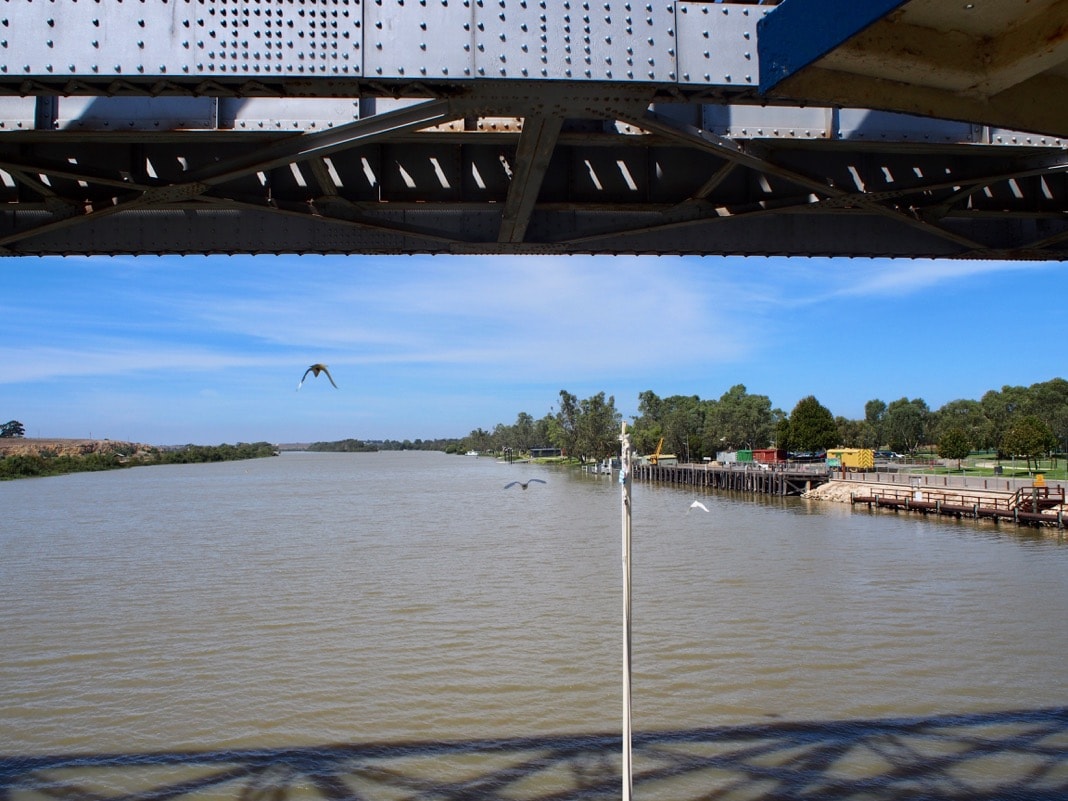 In this picture, you can easily see a few birds under the bridge. However, there must have been hundreds of them all up. 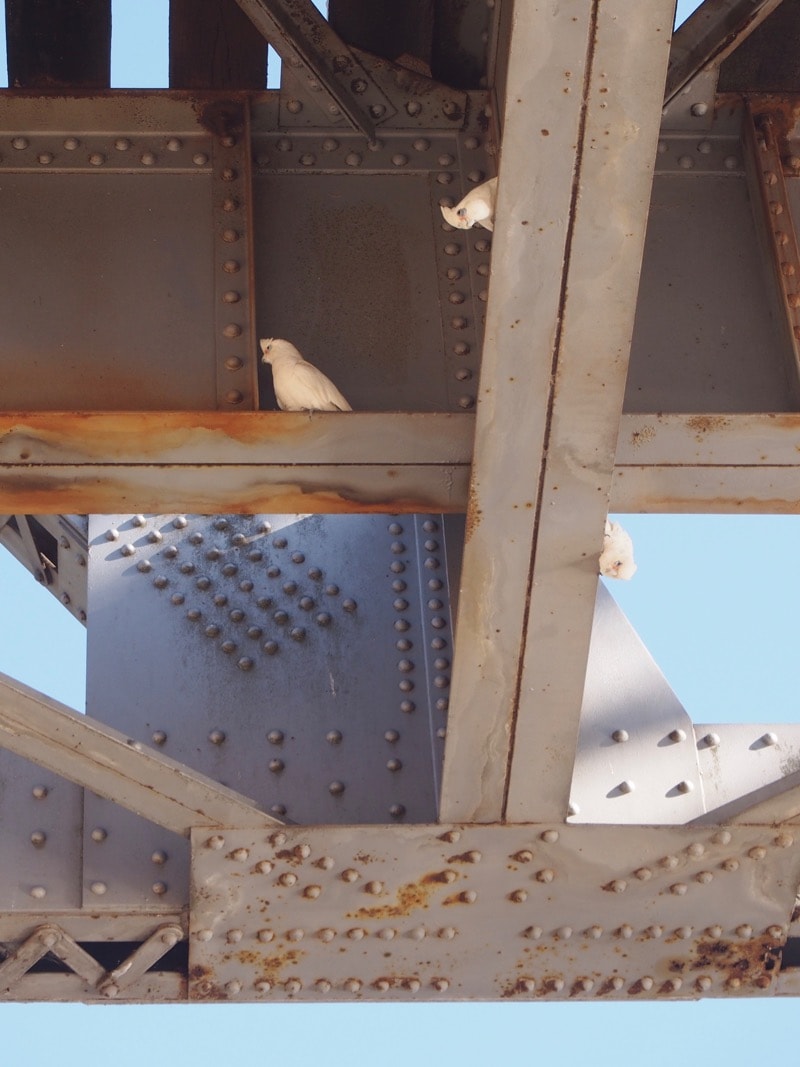 Once we passed the bridge, we continued the boat journey in the other direction for about half an hour.

One of the scariest attractions in Murray Bridge is seeing the Bunyip.

The Bunyip monster wouldn’t be out of place in Greek mythology. You can find it locked away in a specially secured cave next to the Murray River on Sturt Reserve. 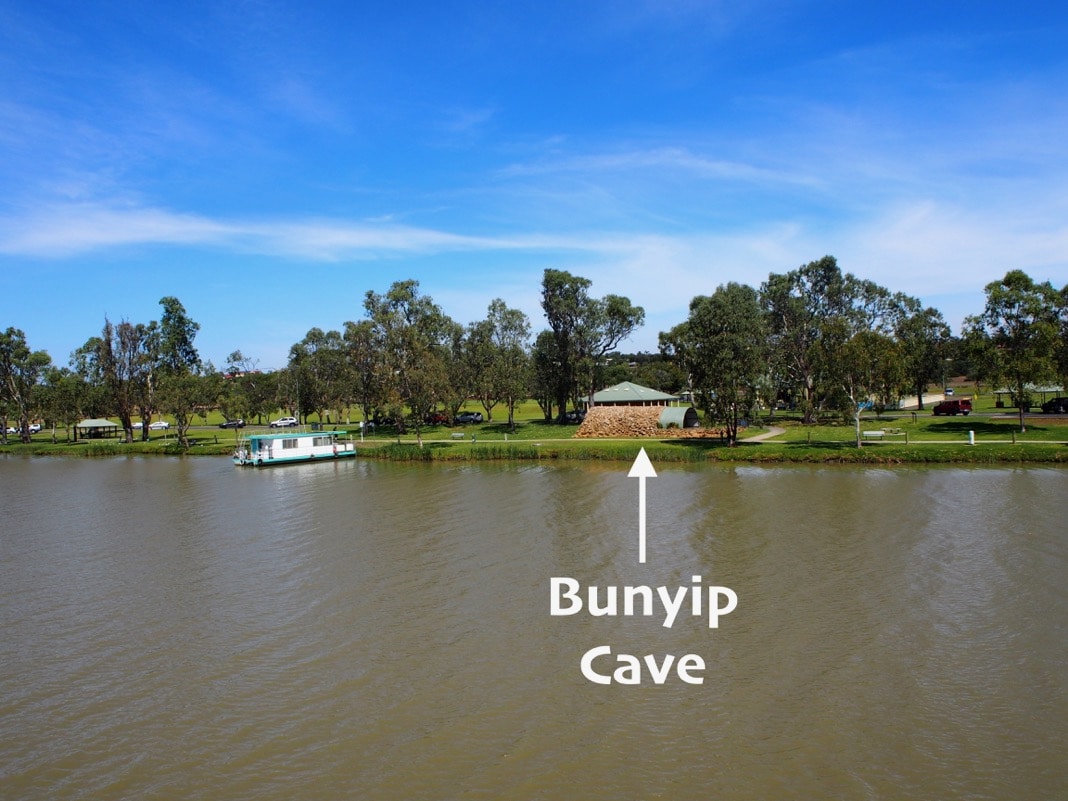 The Bunyip monster is behind a metal cage, so you don’t need to worry.

It may scream at you, and it might move in a way to frighten you, but it can’t get you.

The myth of the Bunyip came about mainly as a warning for children. First, to teach them not to catch more fish than they needed. Otherwise, the wrath of the Bunyip awaits. 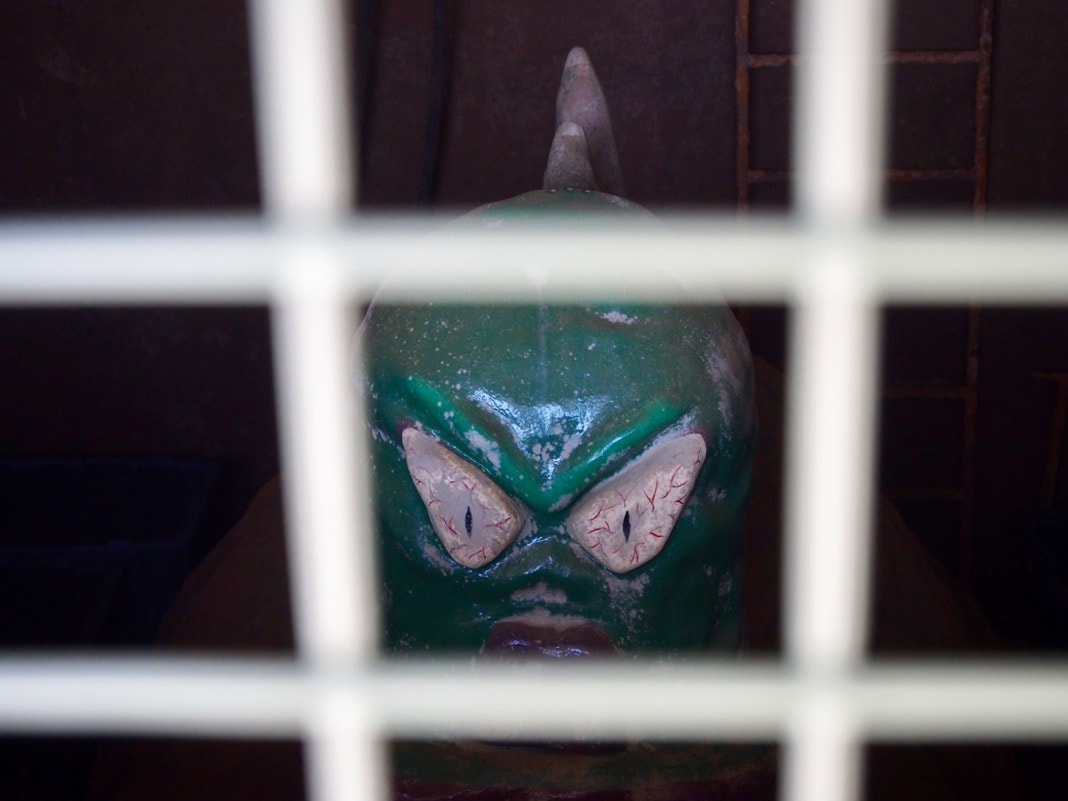 We are heading back to where the boat first picked up passengers for the lunch cruise in the pic below. 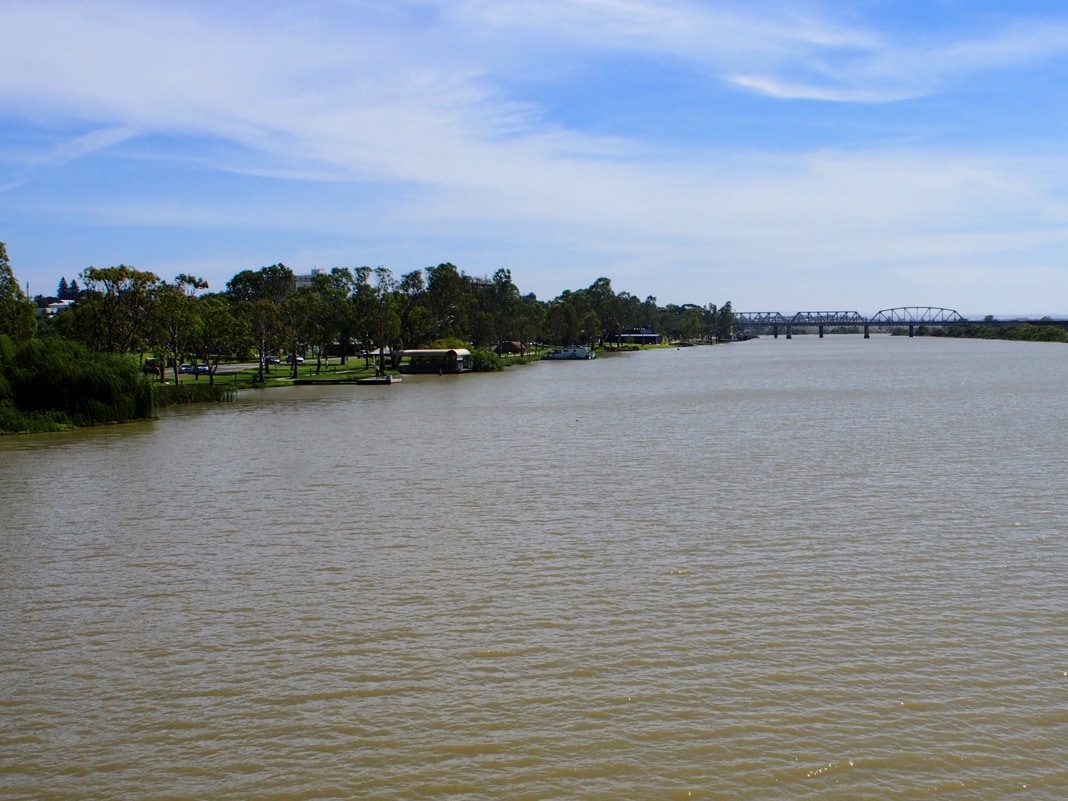 The Captain Proud lunch river cruise is not too long, and it isn’t too short.

You get a nice lunch, and it gives you a taste of what it would be like to do an extended cruise on the Murray River.

After the river cruise, we visited the town of Mannum, which is about 32 km away from Murray Bridge.

I have to say that I think this town is much more charming than Murray Bridge, though the Bridgeport Hotel in Murray Bridge probably makes up for it.

Mannum has that extra beauty that you won’t want to miss.

The Mary Ann Reserve along the side of the Murray River seems to be the most beautiful part of Mannum to go for a stroll.

As we walked along the Murray River, we saw a larger boat. It seemed like a good photo opportunity.

After taking the photo, we sat at a bench for a little while. I then walked a bit further away and took this pic. 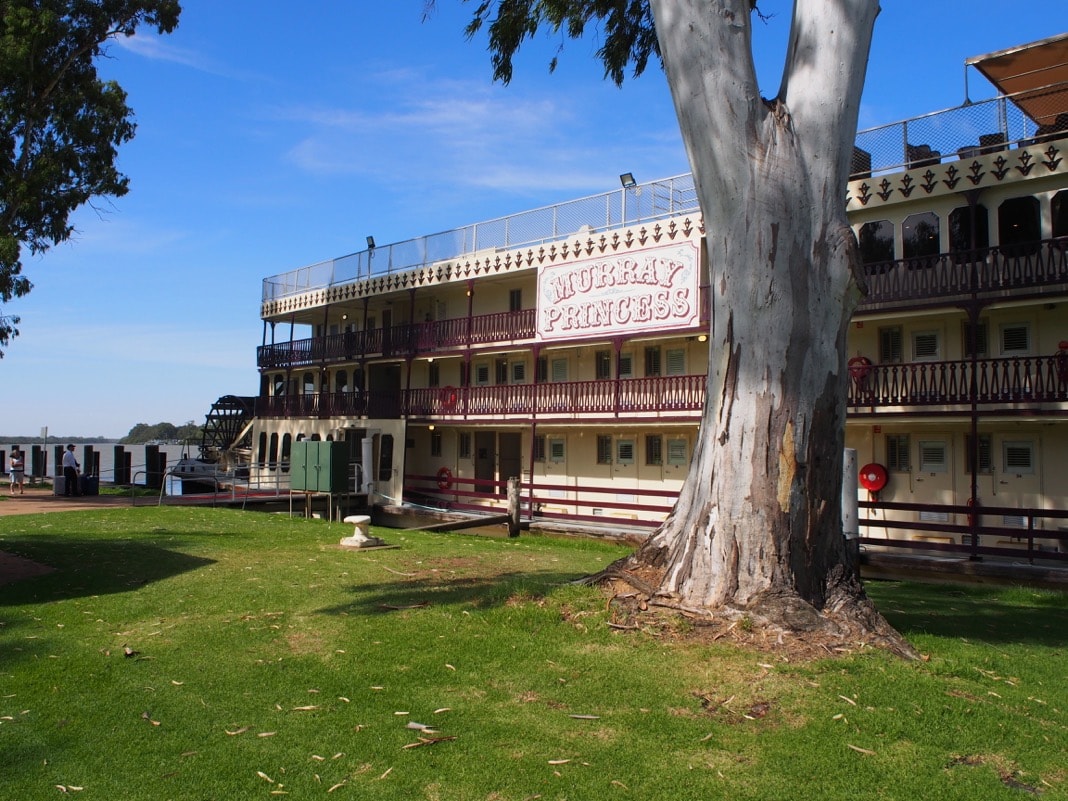 PS Murray Princess is another option if you want to go on a Murray River cruise for 3, 4, or 7-nights.

Every Monday at Mannum, you can also do a 1 hour 45 minute lunch cruise on the boutique Proud Mary riverboat. It departs at about 10:45 am.

So which one is the best Murray River day cruise? Either one of them.

But I think Captain Proud is the best Murray River day cruise because it is a slightly longer cruise.

More things to do in Adelaide

For anyone wanting to know more about Adelaide, here are some more ideas of the best things to do in Adelaide. 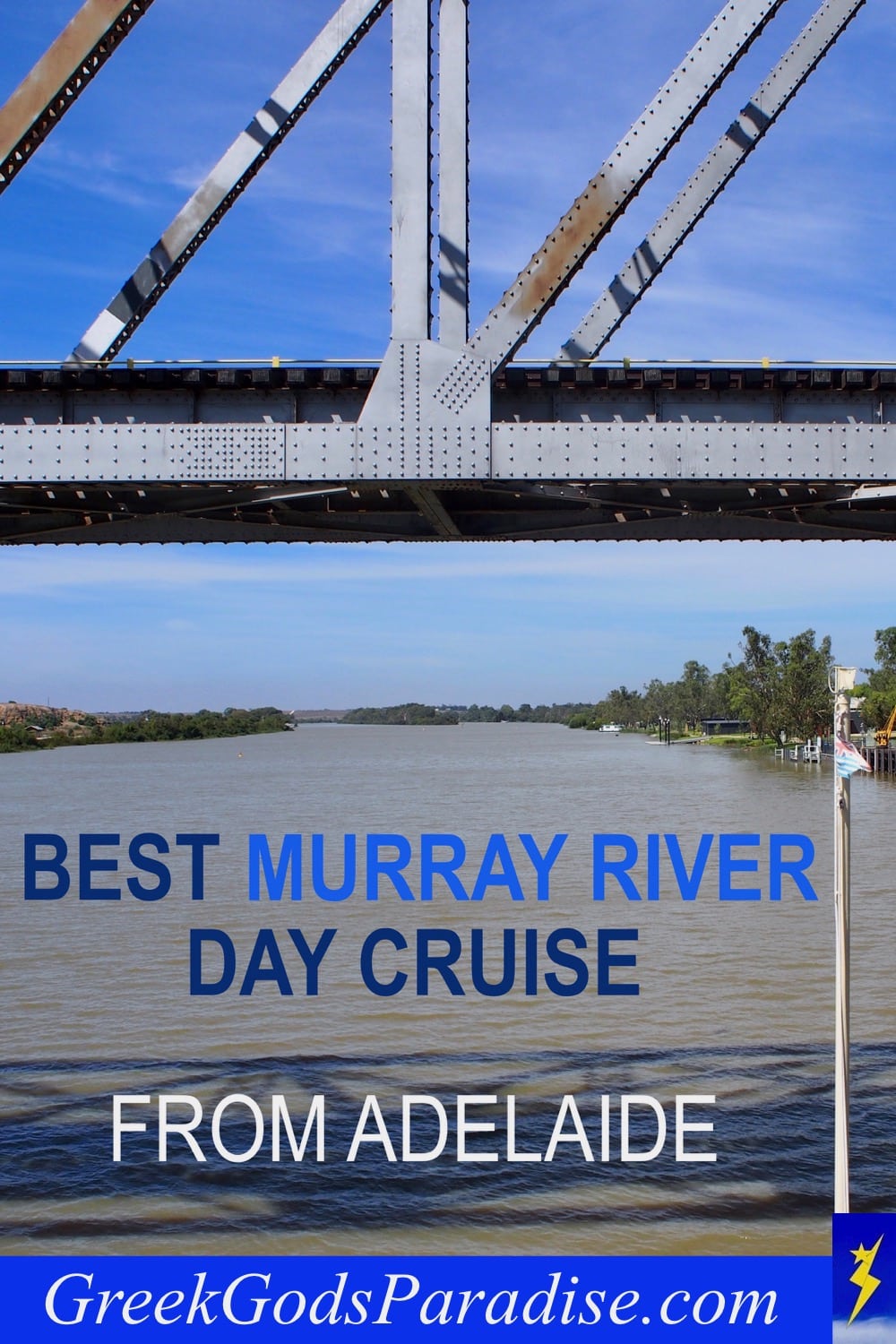 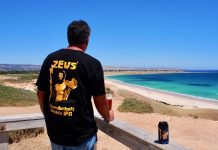 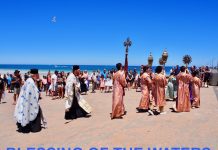