Home Greek Gods and Mythology How to make Greece great again: The 5 Best Things Greeks can... 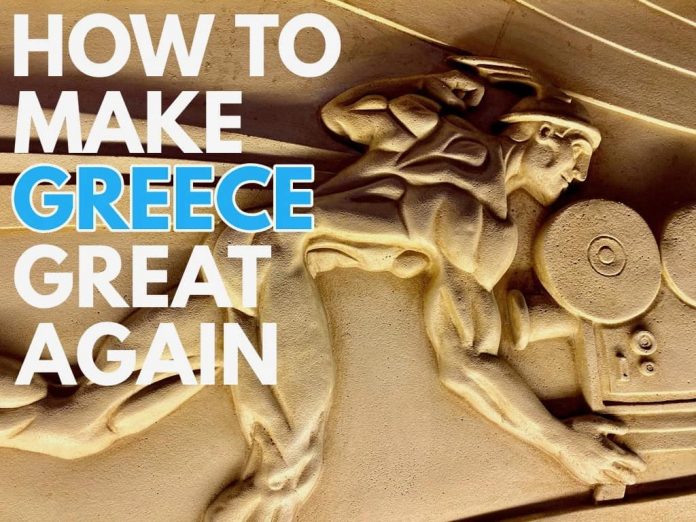 Most Greeks and friends of Greece would probably like to know how to make Greece great again.

I’m sure there are plenty of people out there with their own ideas and strategies to achieve it.

In my opinion, though, after lots of deep thought, these are five of the best things Greeks can do to make Greece great again.

Before I begin, let me clarify, this isn’t a joke.

1. Don’t go to the Olympic Games outside of Greece

That’s right, don’t go. If you’re an athlete or a spectator, and you want to make Greece great again, then this is one thing that needs doing.

Boycott the Olympic Games outside of Greece.

Some of you may be thinking that it wouldn’t be fair on the athletes since they’ve trained hard, and Olympian athletes want the opportunity to compete against the best athletes in the world.

Let me clarify, Greece should partake in the Olympic Games, but only in Greece.

It will probably never happen of its own accord, so the next best option is for the Greek people to purposely boycott the event should it ever be held in another country.

This idea may sound stupid to some of you, but the thing is, the Hellenes started it.

So why doesn’t the Olympic Games belong to Greece and Greece alone?

The French have their champagne, so it seems fair and reasonable that Greece should have the Olympic Games.

Why should anyone else be allowed to call it the Olympic Games?

How to take back the Olympic Games

Give other countries a choice. Where do they want to go?

Even if Greece competes against itself, it’s still a huge win. However, I’m sure many other athletes would want to compete in Greece’s Olympic Games.

It doesn’t matter if no one outside of the country turns up anyway in the scheme of things because that only means more Olympic gold medals for Greece.

The only minor issue I see is that there would be international legal rights to the “Olympic Games” brand name usage nowadays, even though the Olympic Games originated in ancient Greece.

If Greece can’t use the title Olympic Games, don’t sweat it because all Greece has to do is change the name to something like the Games of Zeus.

The Olympic flame lighting ceremony already takes place in Greece at Olympia at the beginning of every Olympic Games, and that’s a great start.

Important point: Greeks must stop passing the Olympic flame onto other nations. How can any other Olympic Games be legitimate if Greece doesn’t pass on the flame?

Greece only has to hold a few sporting events to get the ball rolling.

Provided there are at least two Greek competitors in each event, then all should be fine.

The Games of Zeus could start very simply by including a marathon, a sprint, javelin, and discus throwing, as well as an archery contest.

Greek athletes competing in these sporting contests could be the first to boycott any other Olympic Games held outside of Greece, and over time it would grow from there.

This approach would almost certainly accomplish bringing back the entire Olympic Games to Greece one day.

The French have exclusive naming rights to champagne. I’m optimistic the Greeks could bring back their Olympic Games, and rightfully so.

Getting the Olympic Games back to Greece permanently every four years would have a massive impact on making Greece great again.

2. Bring the Parthenon Marbles back to Greece

Bringing back the Parthenon (Elgin) Marbles to Athens is another treasure that would surely make Greece great again.

It’s all about power and control at the end of the day. That’s the most apparent reason why the UK and the British Museum are hesitant to return the marbles to their rightful home in Athens.

It is very childish when you think about it.

Well, two have to play at that game to get them back.

One way to get them back is for the Greeks to mock the British royal family. 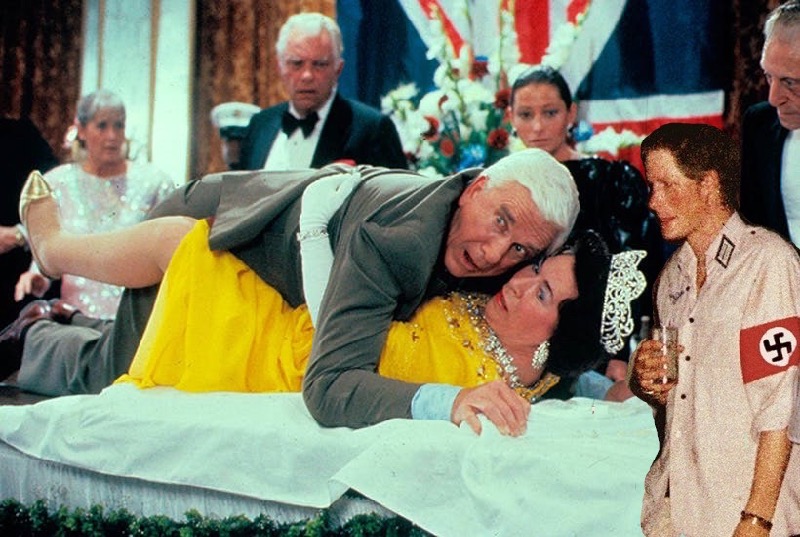 Create an artwork that mocks the royals and place it inside the Acropolis Museum in Athens. To be exact, at the same spot where Parthenon Marbles would go if they returned.

Only remove the mock piece after the Parthenon Marbles have safely returned to Athens.

In an interview with Jeff Murray, a fantastic artist from England, even he wanted the Parthenon Marbles to return to Greece.

Not sure who in England is blocking this move, but I blame the British Royals. What’s the point of being a Royal if your influence to do the right thing is minuscule.

So mock them until the day the Parthenon Marbles return to Greece. It will be an exciting tourist attraction in itself.

Greeks have to start producing a few good English-speaking films, and for Greek God’s sake, keep those Greek weird wave movies down to a minimum.

I have already talked about how these so-called weird wave films have stuffed up the entire Greek film industry.

The good news is that there’s still some hope for the movie business in Greece.

It’s definitely not all bad since there are a few classic movies set in Greece and on the Greek Islands.

However, the problem is that for the vast number of these films, Greeks didn’t create them.

Greeks have to learn from this. Hopefully, someone out there will take a long look at this massive list of the best movies set in Greece and create something even better.

Can a Greek even make an enjoyable movie to watch? By this, I mean a movie that you wouldn’t mind repeatedly watching, at least two times.

The Kings of Mykonos (2010) is an excellent comedy, but I want to see a top movie made by Greeks who live in Greece. Unfortunately, the maker of this movie is an Australian Greek.

If a Greek can create an international hit, I’m sure it would help make Greece great again.

The major problem with teaching religion in schools is that it stops any of the Universe’s higher powers from bothering to return to Earth to teach humanity themselves.

Why would any God or Goddess want to leave eternal paradise when there’s NO incentive to return?

So if religious teaching stops, the likely conclusion is that it will force their return.

In any case, teaching religion in Greek schools is all wrong.

If you want to know why you can read 12 Greek myths that prove the Bible is fake.

5. Return to the Olympian Gods

The most significant move Greeks can make if they want to make Greece great again is returning to the Olympian Gods.

Greeks must return their allegiance to the Greek Gods who made ancient Greece great in the first place.

The Greeks should have never abandoned these Greek Gods. However, Ares, God of war, is the exception.

Let’s take a look at what happened to Greece since Christianity took over.

There have been terrible times, such as the Dark Ages and witch-burning events, throughout Europe.

Turkish rule in Greece, the Nazi invasion, a brutal Greek civil war, a non-Greek as king, extremely harsh Austerity measures, total Government incompetence and corruption, and no doubt it will go on and on as more time passes.

Hiking up Mount Olympus in Greece taught me one huge lesson that I’ll never forget, proving that the Greek Gods are pissed off.

If only Greeks would realize it for themselves. Only then can Greece be truly great. 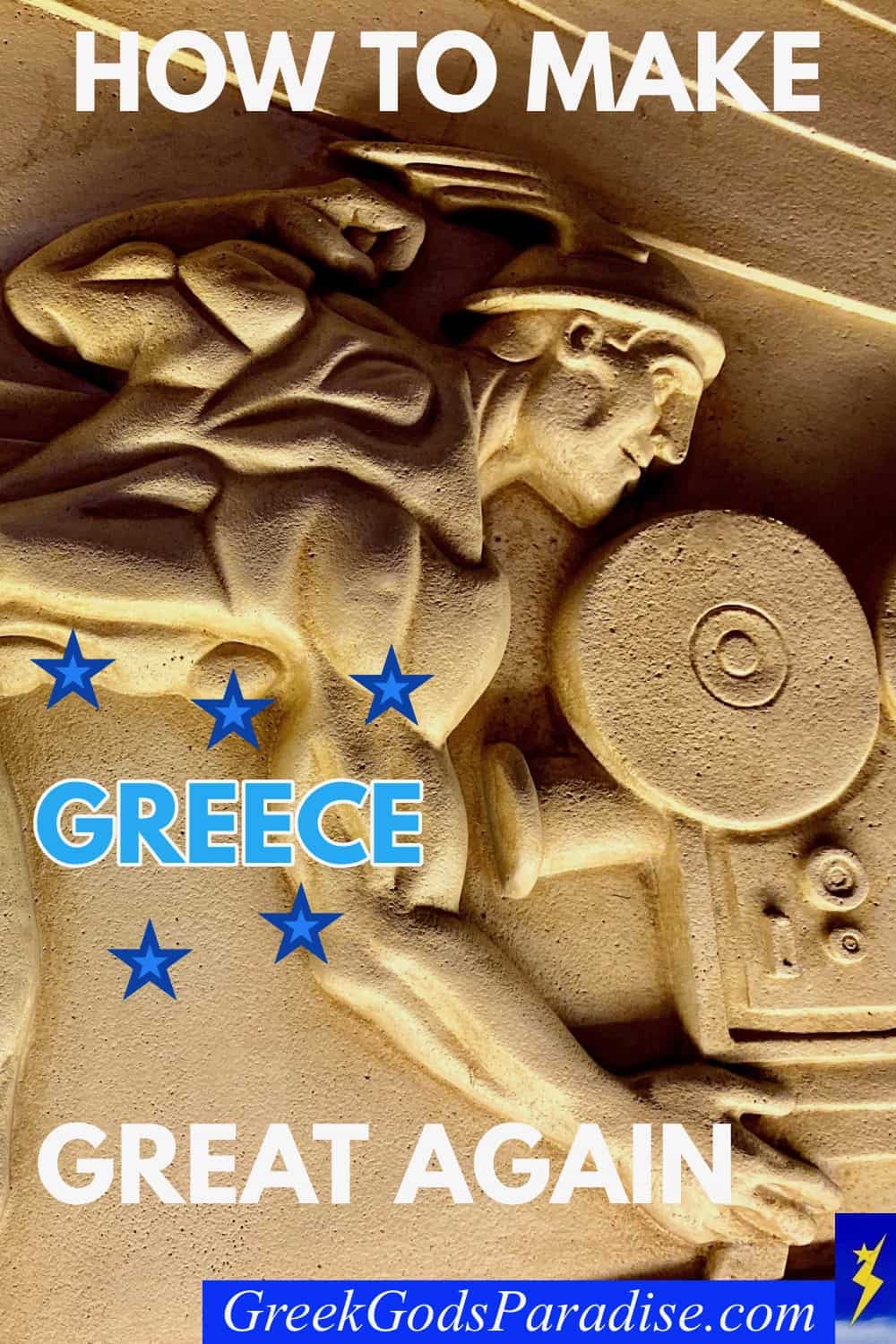 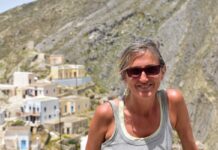 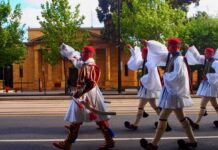 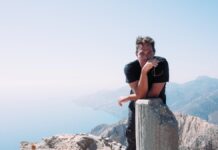